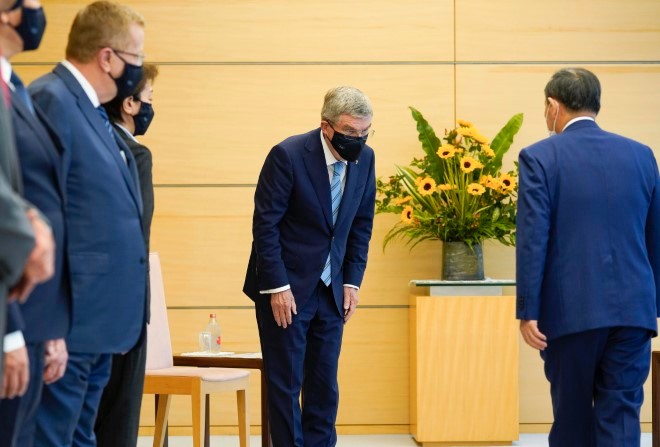 Tokyo reported its highest number of new COVID-19 cases in almost six months on Wednesday, the Tokyo Metropolitan Government said with the Tokyo Olympics opening in just over a week.

Suga and Bach have both pledged that the Tokyo Olympics will be “safe and secure” despite the games opening with Tokyo and neighboring prefectures under a national government-imposed state of emergency.

Tokyo reported 1,149 new cases on Wednesday. This was the highest since 1,184 were reported almost six months ago on Jan. 22. It also marked the 25th straight day that cases were higher than they were a week earlier.

In Hamamatsu, 150 miles southwest of Tokyo, city officials reported a COVID-19 outbreak among staff at a hotel hosting Brazilian Olympic team members for pre-games training. Eight hotel workers have tested positive since Monday, the city said. The Brazilian athletes and coaches, whose rooms are in a separate area from other guests, have all tested negative.

Suga asked Bach to ensure that the Olympics will be safe, particularly for the Japanese public, of which fewer than 20 percent are fully vaccinated.

“To gain the understanding of our people, and also for the success of the Tokyo 2020 Games, it is absolutely necessary that all participants take appropriate actions and measures including countermeasures against the pandemic,” Suga told Bach. “As the host of the games, I do hope that the IOC will make the efforts so that all athletes and stakeholders will fully comply with these measures.”

Bach replied: “We’d like to reaffirm all our commitment on the side of the Olympic community to do everything, that we do not bring any risks to the Japanese people.”

Bach told Suga that 85 percent of the athletes and officials living in the Olympic Village on Tokyo Bay will be fully vaccinated. He said almost 100 percent of IOC members and IOC staff were “vaccinated or immune.” The IOC also says between 70-80 percent of international medical representatives were vaccinated.

The IOC and Tokyo organizers last week banned fans from all venues in Tokyo and three neighboring prefectures. A few outlying venues will allow some spectators, and fans from abroad were banned month ago.

About 11,000 athletes and tens of thousands of others will enter Japan for the Olympics. The Paralympics will add about 4,400 more athletes.

Japan has attributed about 15,000 deaths to COVID-19, a number low by many standards but not as good as most of its Asian neighbors.

The Olympic torch relay has also been pulled from Tokyo streets, with the Tokyo government fearing the relay would draw crowds and circulate the virus. The opening ceremony is July 23 at Tokyo’s new $1.4 billion National Stadium.

Bach is expected to travel Friday to Hiroshima, and his vice president John Coates to Nagasaki to use those two bombed cities as backdrops for promoting the Tokyo Olympics and the first day of the so-called Olympic Truce.

The Olympic Truce, a tradition from ancient Greece, was revived by a United Nations resolution in 1993.

Bach arrived in Tokyo last week and spent the first three days self-isolating in the five-star hotel that the IOC uses for its headquarters in Tokyo.

The IOC is pushing ahead with the Olympics, despite opposition in much of the Japanese medical community, partly because it is dependent for almost 75 percent of its income on the sale of broadcasting rights.

Bach later acknowledged the IOC “always knew that there is this skepticism” among the Japanese people but that they “have to gain confidence” from the protective measures in place.

“You have already seen in the last couple of weeks it’s changing slowly but surely,” the IOC leader told international media in a conference call. “When the athletes finally compete this will be well-appreciated here by the Japanese people.”

Bach also revealed he had doubts “every day” about the games going ahead in the 15 months since they were postponed but to voice them would have disrupted athletes preparing to qualify and compete.

“The challenge was that you could not speak about this,” he said. “This could or would have become a self-fulfilling prophecy. They (athletes) trusted us.”