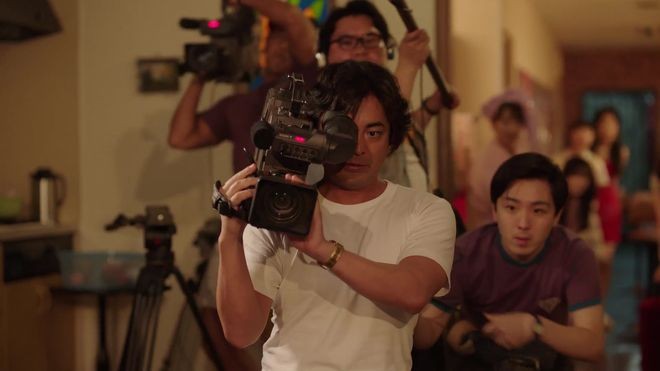 It took two years to finish production of Season 2, but chief director Masaharu Take seems satisfied with the work.

“I could finally express the true nature of ‘The Naked Director,’” he said.

The new eight-episode series revolves around Toru Muranishi as he falls from glory after rising to stardom in the pornography industry.

Takayuki Yamada again stars as the adult video director, while Shinnosuke Mitsushima, Tetsuji Tamayama and other main cast members reprise the roles of their eccentric characters.

The first season, also directed by Take, is set in the Showa Era (1926-1989), during which Japan experienced rapid economic growth, culminating in the roaring asset-inflated economy.

The second season takes place in the Heisei Era (1989-2019), when the country entered a prolonged slump.

Failing to see the changing times, Muranishi plans to start a satellite broadcasting business and stubbornly continues to raise money for his new project. But his friends and allies start to shy away from him.

“From the beginning of the project, I was planning to show how Japan loses steam during its transition from Showa to Heisei as if in synchrony with Muranishi,” the director said.

After he started working in the film industry in the 1990s, Take saw how the working conditions deteriorated as a result of ever-decreasing production costs.

“Things have gotten out of control because industry members are determined to make movies without spending too much money even though filmmaking is expensive,” the director said.

Meanwhile, Take hopes not only adults but also younger audience members will enjoy the show.

“In this day and age, adults try to show children only things that are gentle to them. But in real life, there are things and people that are lewd and difficult to deal with,” Take said. “It would be my utmost pleasure if ‘The Naked Director’ serves as a starting point for them to learn about the society they have yet to know.”