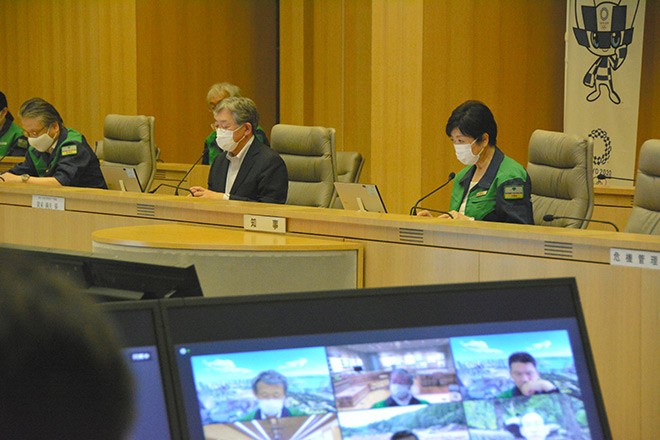 Tokyo Governor Yuriko Koike, far right, listens to reports from experts on COVID-19 at a meeting on July 15. (Momoko Ikegami)

A panel of experts on the COVID-19 crisis on July 15 warned that the daily average of new cases could exceed 2,400 in Tokyo in four weeks' time, higher than the third wave peak.

The panel advising the Tokyo metropolitan government also raised concerns about a crisis in the medical care system now that the number of hospitalized patients exceeded 2,000.

The experts forecast that if that rate of increase remained unchanged, the average would reach 1,402 by July 28 and 2,406 by Aug. 11. The latter figure would exceed the 1,816 average at the peak of the third wave of infections in winter.

A main cause of the recent surge in new cases is believed to be the Delta variant of the novel coronavirus. As of July 14, a total of 1,297 patients were found with that variant. The daily figure for July 13 was 178, a record high.

The experts also reported that while the Delta variant made up 14.7 percent of all cases for the one-week period ending June 27, the figure had increased to 21.5 percent by the week ending July 4. One expert said the pace at which the Delta variant was becoming the main one had accelerated.

One positive note reported at the panel meeting concerned pedestrian traffic, which was reported to have decreased in Tokyo following the start of the fourth state of emergency from July 12.

“A certain level of cooperation has been obtained due to the state of emergency,” said Atsushi Nishida, who heads the Research Center for Social Science and Medicine at the institute, at the July 15 meeting.

But he added to further restrain new infections there was a need to further limit the number of those thinking about visiting Tokyo for leisure purposes.

The reports about an increase in new cases raised concerns about the availability of hospital beds to treat COVID-19 patients.

One report was that the number of hospitalized patients rose sharply from the 1,200 or so level of late June to more than 2,000 in three weeks’ time.
The number of cases reported by public health offices about not being able to find an open hospital bed for a patient had risen from about 40 or so a day about a month ago to 125 as of July 14.

“If this situation should continue, there will be an increase in young and middle-aged patients with midlevel symptoms, and there is a possibility that could be followed by an increase in those with serious symptoms," said Masataka Inokuchi, vice chair of the Tokyo Medical Association, at the July 15 meeting. "There is a need to reinforce the hospitalized medical care structure while keeping those factors in mind.”

(This article was written by Yuki Okado and Momoko Ikegami.)