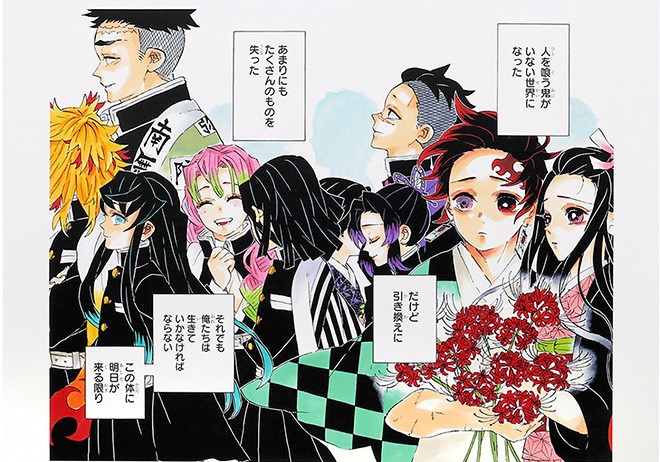 Parts of characters seen at both ends are trimmed away in one of the reproduced original manuscripts of the "Demon Slayer: Kimetsu no Yaiba" manga series. (Provided by Shueisha Inc.)

The publisher of the hugely popular “Demon Slayer: Kimetsu no Yaiba” manga series will reproduce replicas of original manuscripts following online criticism that they were “poorly” made, sources said.

Shueisha Inc. sold sets of 33 replicas of original manuscripts of the 204th and penultimate episode in the series for 38,500 yen ($350) each at the online Jump Festa event last December.

The publisher touted the product as “true to the original,” but it was actually created by simply enlarging copies of manuscripts printed in the comic book and magazine.

After Koyoharu Gotoge, the author of the manga series, demanded an explanation from Shueisha, the company started an in-house investigation and found that a staff member inexperienced in reproducing original manuscripts had created the product, according to the sources.

The publisher concluded in late June that the product failed to live up to the expectations of fans who wanted to see the author’s brushwork in detail.

It decided to properly replicate the manuscripts and deliver the new product to fans in exchange for what they bought, if requested.

Shueisha will also allow those who have already received a refund on the product to buy the new version.