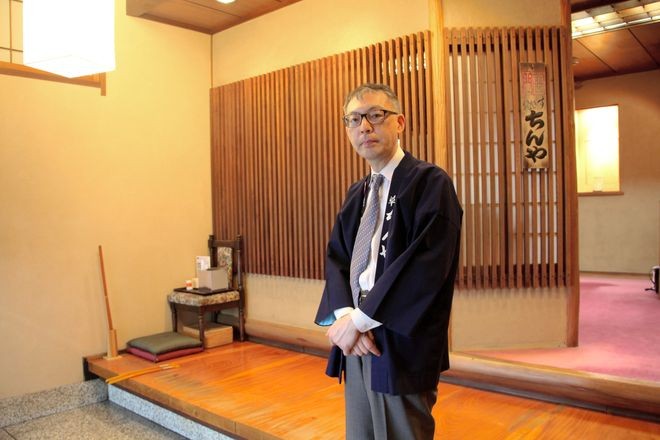 Fumihiko Sumiyoshi, the sixth-generation manager of the Chin-ya sukiyaki restaurant in the Asakusa district of Tokyo’s Taito Ward (Yuki Kashiwagi)

The boisterous conversations are coming to an end at a sukiyaki restaurant with a 140-plus-year history in Tokyo’s Asakusa district, which will shut its doors after a plunge in business its owner blames on the COVID-19 pandemic.

“Sukiyaki essentially shortens the distance between eaters to put them closer to one another,” said Fumihiko Sumiyoshi, 55, the sixth-generation manager of the Chin-ya sukiyaki shop. “But what makes sukiyaki appealing worked against it in the coronavirus crisis.”

Chin-ya, located along a street facing the iconic Kaminarimon gate at Sensoji temple since the early Meiji Era (1868-1912), is set to shut on Aug. 15.

The operators of the long-running established restaurant, which prided itself on bringing people closer through its communal dish served in a pot, say the decision to close was clinched by the government's COVID-19 policy that warns citizens to avoid the “three Cs” of closed, crowded and close-contact settings.

Though the restaurant boasted a nostalgic ambiance, it had fallen too far behind the times. Plummeting customer numbers during the pandemic, however, ended up nixing the plan to refurbish the eatery.

Its name, Chin-ya, comes from the building's use during the Edo Period (1603-1867) as a veterinary clinic that delivered Japanese spaniels, called "chin," and other pets to daimyo feudal lords and wealthy merchants.

The name stuck even after the building turned into a restaurant in 1880.

Following the Meiji Restoration in 1868 that brought down the Tokugawa Shogunate and restored imperial rule, Fukuzawa Yukichi (1835-1901) and other cultural figures frequented beef pot restaurants.

Beef pot became a fashionable food, and Tokyo is said to have been home to nearly 500 beef pot stores in 1877, situated mainly in Asakusa.

Sumiyoshi, who became Chin-ya’s manager in 2001, had a prime spot to assess how customers reacted to the restaurant: He has spent long periods at its entrance collecting their shoes after they took them off to go inside.

“I met customers as they arrived and were going home, so I could tell how happy they were by how they left,” he said.

While people typically eat sukiyaki to celebrate special occasions, many also come to Chin-ya after memorial services, grave visits and other Buddhist rituals since there are many temples around Asakusa.

Sumiyoshi carefully arranged details of the restaurant to create “lasting memories” for families and friends who dined there.

His efforts paid off. Sumiyoshi recounted seeing regulars who had frequented Chin-ya over three generations pop in for a bite with relatives from the next generation in tow, who said they had come to eat at “the place our grandpa loved.”

Another group of customers used to get together in front of the restaurant and enjoy sukiyaki every Jan. 3 without making a reservation. They were former colleagues at a company that had located in the neighborhood, he said.

But the group thinned out year after year.

Several years ago, only a single person showed up and they didn't order sukiyaki, saying, “Eating it by myself would just make me feel lonely.”

“I should have made more effort to talk the customer into eating with us,” regretted Sumiyoshi, recalling the retreating figure.

In 2008, Sumiyoshi began organizing a conference bringing together more than 50 sukiyaki restaurant operators from across the nation. There had been no sukiyaki business associations, so for many it was the first time to meet another operator of a sukiyaki restaurant.

The event has since been happening several occasions a year with different shops holding it in rotation.

“The gathering is very exciting as we aggressively discuss topics like a certain Welsh onion,” said Sumiyoshi, jokingly, adding, “This, however, must generate a considerable amount of carbon dioxide and droplets of saliva.”

HOPES FOR A REBOOT

The current restaurant's building was constructed in 1975. Its wooden frames have warped so badly now that its windows won't open. On hot days, the overheated air conditioning system stops.

With no end to troubles like these, the arrival of the coronavirus pandemic ended up dealing the final blow to Chin-ya.

“Right now, restaurants themselves are seen as evil,” Sumiyoshi lamented.

“When you eat sukiyaki, people sit with their knees close to one another so all of them can reach the pot. You eat while talking energetically. 'Oh, this has not boiled well,’ someone says, or ‘This looks nice.’

"Sukiyaki makes for a pleasant meal as it brings people closer mentally and toward the end of it people are more friendly."

But Sumiyoshi made up his mind to shut down the restaurant and sell the building and in late June he mailed a “notification of closure” letter to regulars of the eatery.

Since then, he has received a flood of inquires.

Though Chin-ya will close, its managing firm will be kept operational, with the possibility of reviving and restarting the restaurant in some form someday.

“I'm not giving up," said Sumiyoshi. "I'm looking forward to that day." In the meantime, he added, he would be singing Kyu Sakamoto's 1960s hit song "Sukiyaki."