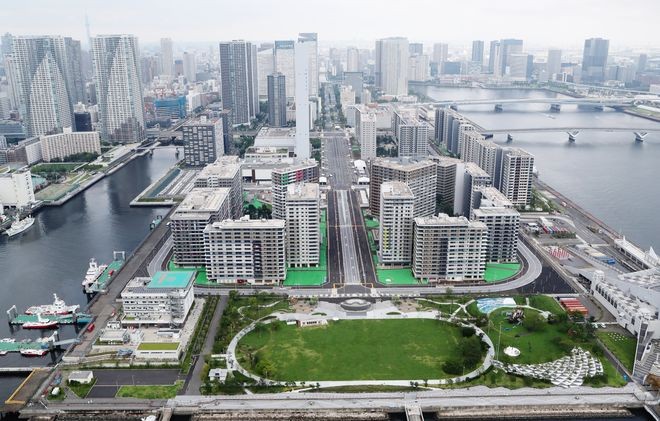 I recently had an opportunity to go for a stroll through Tokyo’s waterfront area ahead of the opening of the Summer Olympics.

My eyesight was flooded with a plethora of signboards, some indicating a detour and others announcing that a parking lot was closed.

I walked past police officers mobilized from far-flung areas of Japan, including Tochigi, Osaka and Saga prefectures. The national flags of South Korea and Croatia were seen put up at the Olympic Village.

An article that appeared in The New York Times last month came to mind. It quoted an expert as saying that Prime Minister Yoshihide Suga would be “politically dead in the water” if he were to pull the plug on the Games.

The expert also likened the risk of a surge in COVID-19 cases in Tokyo to “the potential making of the Godzilla variant.” He could have described it with a milder expression, but his words touched a sore spot all the same.

The New York Times was even more vehement in its style when it denounced Japan 83 years ago.

“We have the opportunity, by refusing to take part in the 12th Olympiad, if it is held in Tokyo, of expressing a moral judgment,” the U.S. newspaper said in condemning a plan to hold the “festival of peace” in Japan, which was sending troops to Manchukuo (a puppet state in today’s northeastern China), Shanghai and Nanking (today’s Nanjing).

The military authorities in Japan made it no secret at the time that they were opposed to hosting the Olympics. There was mounting opinion saying that Japan should commit all its available resources, including manpower, money and steel, to the fulfillment of war.

In the end, the Cabinet of Fumimaro Konoe, in his first stint as prime minister, decided on July 15, 1938, to give up hosting the Games.

We thus chose to forgo the Olympics in favor of putting everything into war. That past is nothing to be endorsed.

I might say, however, that the public sentiment now bears a certain resemblance to that of those bygone days--for example, a simple skepticism about the wisdom of holding a major sporting event at a time like this, or the lack of a sense of reality about the upcoming Olympics.

I extended my itinerary to the new National Stadium, which is bracing for hosting the Olympic Opening Ceremony.

Solemn music was heard resounding even on a sidewalk I was walking along. A rehearsal was likely going on inside.

I stood still and listened to the tune for a while. A sense of reality, however, still remained elusive to me.

Only a week to go, and the Games are opening in the capital of Japan.