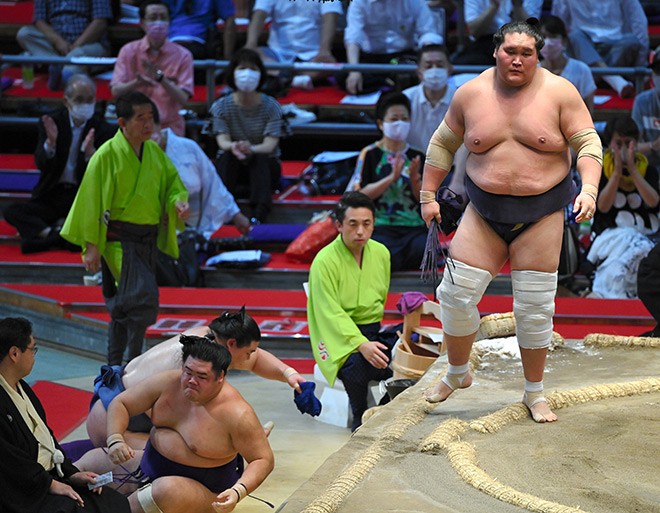 With each methodical win, ozeki Terunofuji continues his relentless but calm push toward promotion to yokozuna, which would complete the most extraordinary comeback in the sport’s history.

The 29-year-old Mongolian never panicked on the 12th day of the Nagoya Grand Sumo Tournament on July 15 against komusubi Meisei, even though his opponent in the past has given him trouble by latching onto his belt.

After Meisei first broke free from an attempt by Terunofuji to halt his movement, the ozeki wrapped his vise-like right arm around the komusubi’s left arm, which was trying to grab the ozeki’s mawashi.

With his opponent firmly in his grasp and no chance of escaping, Terunofuji nonchalantly tossed him out of the dohyo.

The 12 consecutive wins to start a tournament is a first for Terunofuji, who said after the match, “I was able to handle the bout in a calm manner. I am only placing confidence in all the efforts I have made until now.”

He added that he was taking each bout one day at a time, a mantra often recited by sumo wrestlers on a roll.

Terunofuji added that he felt no additional pressure about gaining promotion to yokozuna. That is remarkable, given that it would complete his Cinderella story, as he once looked set to rule the sport in 2015 after rising quickly to its second-highest rank.

But injuries forced Terunofuji into a long absence from the dohyo and sent him plunging from ozeki to the second-lowest jonidan division.

He even contemplated retirement before embarking on a stirring comeback that resulted in his return to ozeki in March after winning the Spring Grand Sumo Tournament.

He followed that up with a triumph in the Summer Grand Sumo Tournament in May, putting him in line for promotion to the sport’s highest rank with another Emperor’s Cup in Nagoya, which would be his fifth.

Two factors are working in his favor.

One is the formidable presence of yokozuna Hakuho this tournament, which was considered his do-or-die one because he had been absent for so long. With Hakuho also piling up wins at the same pace as Terunofuji, the ozeki has not been able to get ahead of himself in thinking about promotion.

The second factor is related to the novel coronavirus pandemic.

Normally, an ozeki gunning for promotion to yokozuna is pestered by reporters on a daily basis from after the morning practice and continuing on into the dressing room where the wrestler is preparing for the day’s match.

The reporters inevitably want to know about the ozeki’s physical and mental condition and what his thoughts are about the possible promotion.

But due to COVID-19, strict restrictions have been placed on the media, and Terunofuji has only had to face online news conferences after each day’s bout. That has clearly lessened the pressure on the ozeki and has apparently made it easier for him to maintain his daily routine and rhythm.

Terunofuji has said that he wanted to experience a scene that only those who have become a yokozuna can relate to. With only three days left in the Nagoya tournament, there appears to be no one standing in his way.

Takahiro Takezono has written about sumo for The Asahi Shimbun for many years.