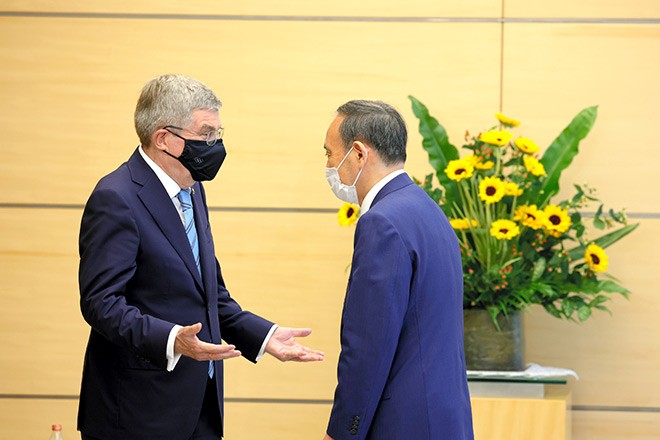 Suga avoided giving a clear-cut answer to Bach’s request during their meeting in Tokyo on July 14, according to top officials at the prime minister’s office.

Suga did not even weigh the pros and cons of reversing an earlier agreement to keep the stands empty to prevent the spread of the novel coronavirus, the sources said.

But an official at the prime minister’s office, where the meeting was held, said changing course and bringing back spectators “is not acceptable for the Japanese government.”

“Even if the infection situation improves, we don’t have the time,” the official said. “First of all, how on earth would you sell tickets?”

The COVID-19 situation has deteriorated in Tokyo, which is now under a fourth state of emergency.

New infection numbers have been surging in the capital, medical facilities are worried about being overwhelmed with patients, and health experts warn that a peak could occur during the Summer Games.

However, the IOC chief asked Suga to rethink the spectator ban, which was strongly recommended by health experts, if things change for the better, such as a decline in new infection cases.

On July 8, the five main stakeholders--the central government, the Tokyo Olympic and Paralympic organizing committee, the Tokyo metropolitan government, the IOC and the International Paralympic Committee—held a meeting in Tokyo and announced that no spectators would be allowed in the Olympic venues due to the pandemic.

The ban covers events and sessions scheduled in Tokyo and three neighboring prefectures, as well as in Hokkaido and Fukushima Prefecture.

A decision on whether fans can attend the Paralympics will be decided after the Olympics close on Aug. 8, they said.