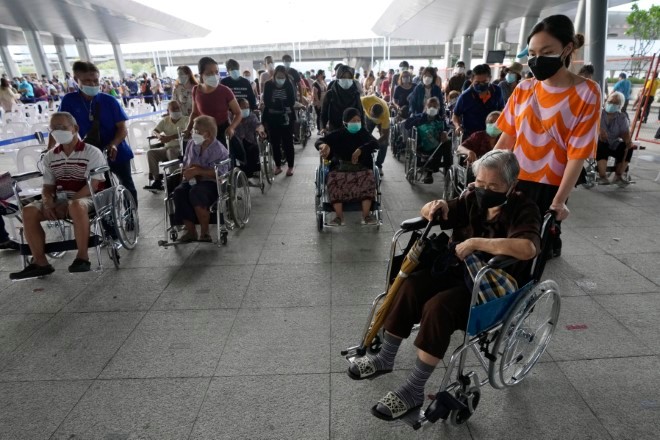 Elderly persons on wheelchairs wait on line at the Central Vaccination Center to receive shots of the AstraZeneca COVID-19 vaccine in Bangkok, Thailand, on July 15. (AP Photo)

BANGKOK--AstraZeneca is seeking to delay delivery of 61 million doses of its COVID-19 vaccines to Thailand by five months, a Thai official said Thursday, as the Southeast Asian country weighs vaccine export curbs to shore up domestic supplies.

At the center of the drug maker’s regional supply challenge is its local production partner Siam Bioscience, which has been shrouded in a veil of secrecy.

Siam Bioscience is owned by King Maha Vajiralongkorn, as part of his vast fortune including land and property estimated at between $30 and $60 billion. According to its shareholder list, the king holds all but two of its 48 million shares.

In October 2020, Siam Bioscience signed a letter of intent with the Thai health ministry and AstraZeneca to produce the COVID-19 vaccine for distribution in Southeast Asia.

Details of the contract have not been made public.

Thailand has relied mostly on AstraZeneca for its vaccine supply and has reserved 61 million doses with the company.

In January, Siam Bioscience’s deal with AstraZeneca came under fire from a banned opposition politician, Thanathorn Juangroongruangkit, who questioned why the contract went to a company that was owned by the king and had never made vaccines before.

AstraZeneca said at the time that Siam Bioscience had passed the same rigorous quality and capacity checks it conducts on its more than 20 licensed manufacturers worldwide.

In March, Thanathorn was charged with the crime of defaming the Thai monarchy over his comments on the king’s company. The maximum penalty is 15 years in prison.

He has denied wrongdoing and said the government’s legal action was politically motivated.

Siam Bioscience’s website describes its business as developing and manufacturing biopharmaceutical products such as one that treats anemia in patients with kidney disease.

Thai officials said earlier this year that AstraZeneca’s Thai partner would supply 180 million to 200 million doses to Asian countries this year, including Thailand.

Siam Bioscience began vaccine delivery in June and had some initial production issues, prompting shipment delays to the Philippines, Malaysia and Taiwan. AstraZeneca on June 28 said it was on schedule to meet its Southeast Asia supply commitments and exports would start in July.

But Thailand’s deputy health minister said on Thursday AstraZeneca’s local facility currently had the capacity to make 15 million doses per month and it was promising to deliver 40% of the output to the country, adding that capacity could increase later.

That would amount to 6 million doses, below the previously agreed 10 million a month from July. A day earlier, Thailand said it was considering imposing limits on exports of locally manufactured AstraZeneca vaccines.

Siam Bioscience did not respond to Reuters requests on Thursday for comment.

AstraZeneca on Wednesday said export of the Thai-made vaccines were “of critical importance” to neighboring countries. It did not respond on Thursday to a request for comment on its deliveries to Thailand.