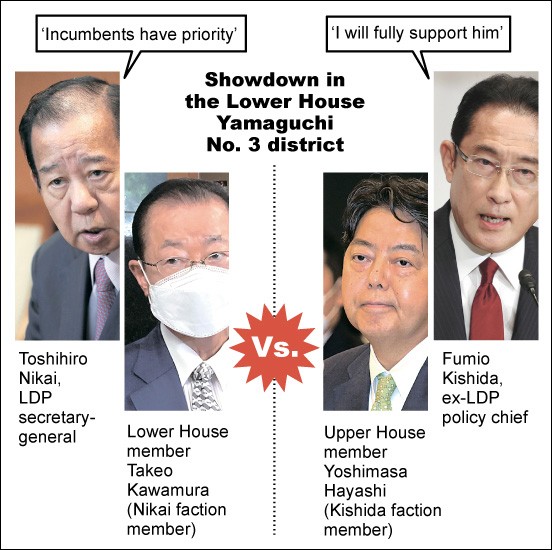 A battle royal is brewing in Japan's heartland that could have major implications for the Lower House election this autumn.

A major showdown in the Yamaguchi No. 3 district will pit two bigwigs within the ruling Liberal Democratic Party who are being backed by influential lawmakers in a factional battle that could affect other districts around Japan.

Yoshimasa Hayashi, 60, an Upper House member who has served in the farm, defense and education ministry portfolios, put his party on notice July 15 that he will contest the seat currently represented by Takeo Kawamura, 78, who has been elected 10 times and once served as chief Cabinet secretary as well as education minister.

Kawamura belongs to the LDP faction headed by Secretary-General Toshihiro Nikai, the powerful No. 2 executive in the party.

Hayashi belongs to the faction headed by Fumio Kishida, the former LDP policy chief who also wields a lot of clout.

Although Hayashi has served 26 years in the Upper House, he said at the July 15 news conference his decision to run in the Lower House election was a strategic move to help him gain his political ambition of becoming prime minister.

While there is no provision in the postwar Constitution that prevents an Upper House member from becoming prime minister, no member of that chamber has ever been chosen for the top leadership post under the current Constitution.

Hayashi was asked if he would still run in the absence of obtaining formal LDP backing.

"No matter what form my candidacy may take, I will carry through with my decision," he said.

Party rules give priority to incumbents and Nikai, for one, has indicated that not only would Kawamura be the one receiving the official LDP nod, but also hinted disciplinary measures might be directed at Hayashi.

At a gathering of his supporters before the news conference, Hayashi received a document signed by all 26 LDP members of the Yamaguchi prefectural assembly expressing their support for him. He was joined at the gathering by four mayors from the No. 3 district as well as a representative from the prefectural branch of junior coalition partner Komeito. Among the major cities in the No. 3 district are Hagi, Ube and Mine.

Hayashi ran unsuccessfully in the 2012 LDP presidential election and had previously been asked by his supporters to switch to the Lower House.

Kishida indicated that his faction would throw its full support behind Hayashi.

Kawamura also spoke to reporters at LDP headquarters in Tokyo about four hours after Hayashi announced he was running in the Lower House election and expressed confidence that he would again receive official LDP endorsement for the No. 3 district.

Yamaguchi Prefecture has long been represented by hugely influential lawmakers.

One factor that seems to have propelled Hayashi into making such a bold move is that Yamaguchi Prefecture is expected to lose one of its four seats under a reapportionment plan based on the 2020 census.

Friction between the Nikai and Kishida factions in the Yamaguchi No. 3 district could stir up trouble in other districts where the two political blocs are seeking to field respective candidates but with only one obtaining official party support.

The opposition Constitutional Democratic Party of Japan is expected to field Fumiko Sakamoto in the No. 3 district.

(This article was written by Go Takahashi, Natsuno Otahara and Yuichi Nobira.)