Tokyo hospitals bracing for the worst in virus infections 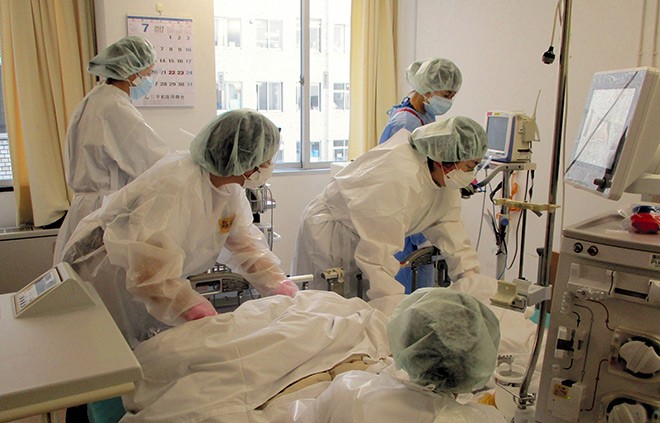 The latest surge in COVID-19 cases in Tokyo has medical experts so worried that some are suggesting canceling the Summer Olympics--even after the start of competitions--if the infection spread worsens.

“The medical situation has already been at the highest alert level in Tokyo, and more infections will only put more pressure on the health care system,” Masataka Inokuchi, vice chairman of the Tokyo Medical Association, said at the Tokyo metropolitan government’s meeting on July 15 on measures to curb COVID-19 cases. “Please do not allow new infection cases to rise higher than they are now.”

Tokyo’s medical facilities are starting to feel the strain.

The number of hospitalized COVID-19 patients in Tokyo jumped to more than 2,000 in three weeks from around 1,200 in late June.

The number of cases in which public health centers could not find available hospital beds for infected patients and asked the Tokyo metropolitan government to take over such cases tripled to 125 from 40 a month ago.

The Tokyo metropolitan government did learn a lesson from the third wave of infections that started at the end of last year and pushed the medical capacity for COVID-19 patients to the limit.

The government increased the number of beds for COVID-19 patients by more than 2,000 from early January, mainly at Tokyo-run or public corporation hospitals.

The hospital bed occupancy rate was 31.8 percent as of July 14.

But a source familiar with the hospital-bed operation said that increasing the number of beds to resolve the growing virus problem is “a pie in the sky.”

A Tokyo official mentioned another problem that has been persistent during the pandemic: “If the number of patients soars, there won’t be enough medical staff in some cases who can provide care for the hospitalized patients.”

Nihon University Itabashi Hospital in the capital’s Itabashi Ward has 56 beds prepared for COVID-19 patients with moderate and serious symptoms. Twenty-three of those beds were filled as of July 14.

The number of COVID-19 patients at the hospital had hovered around 10 until June, but the figure doubled in just one week.

According to the hospital, many of the infected patients during the third wave were in their 70s or older. But the hospital is now seeing more patients in their 40s or 50s.

In a worrying trend, 40 percent of the patients over the past two weeks were infected with the more contagious Delta variant.

“If new cases increase at this pace and the number reaches 2,000 per day, all our beds will quickly be filled,” Satoru Takahashi, chief of the hospital, said.

He also said the hospital would be forced to assign additional general ward nurses to COVID-19 sections if the number of patients exceeds 30.

Another hospital doctor who treats COVID-19 patients with serious symptoms said the availability of hospital beds is no solution if there is no one to take care of the patients.

“Even if we have empty beds, we cannot accept patients unless we have enough medical workers,” the doctor said. “The speed of infections must be slowed down to prevent a ‘clogging’ in hospitalizations.”

The latest state of emergency was declared for the capital on July 12. But crowds have been seen in entertainment districts, and pedestrian traffic and travel will likely increase in the summer holidays.

In addition, thousands of Olympic-related visitors from overseas are now streaming into the country ahead of the July 23 Opening Ceremony for the Tokyo Games.

Shigeru Omi, head of the central government’s panel on responding to the COVID-19 pandemic, mentioned his concerns at an out-of-session meeting of the Upper House Cabinet Committee on July 15.

“People have gotten used to the state of emergency, so measures to restrict people’s actions and movements have become less and less effective,” he said.

Omi urged the government to invest more time and effort into science technologies, such as vaccines and testing.

Nobuhiko Okabe, head of the Kawasaki City Institute for Public Health who chairs the Tokyo Olympic organizing committee’s expert panel on anti-virus measures, said drastic steps may be needed to protect the medical system and keep the public safe from the virus.

“Like the serious situation in Osaka Prefecture during the fourth wave, if Tokyo falls into a state where people who need hospital treatment can’t be admitted to hospitals, we should consider canceling the Olympics,” he said in an interview with The Asahi Shimbun on July 13.

“We have no time for the Olympics” if people cannot receive the necessary medical care, he said.

Okabe added that he might ask the central government and the organizing committee to cancel the Olympics even after start of competitions.

(This article was written by Yuki Edamatsu, Hiromi Kumai and Naoyuki Himeno.)