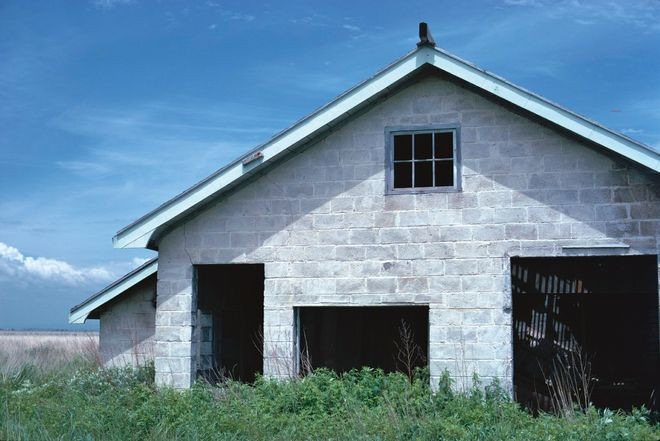 The 80-year-old photographer is particularly renowned for impactful images that define our times, such as the cover shot on "Double Fantasy," John Lennon's final album with Yoko Ono before the musician was shot to death in New York in 1980.

One of the iconic works on display at the venue is "A Fine Day," which shows what appears to be an abandoned house with no doors standing against the backdrop of a blue sky. His photo book published in 1975 was named after the picture, which also inspired the title of the latest event.

The photo book mainly features photos from his series that ran in the weekly Asahi Graph pictorial magazine for six months in 1974.

Although Shinoyama repeatedly made it clear he did not want to hold a retrospective, he said he felt the current exhibition is a success.

"I think it shows well my ceaseless desire to take photos as I have been running side by side with the real world for the past 60 years," Shinoyama said.

His style is to take photos as he changes his themes and techniques in accord with the changing times.

"I have been taking photos, using all kinds of photographic techniques depending on the theme. I did that for Asahi Graph every week," he recalled.

The images on display include a scene from a boxing match, the day a typhoon day hit as well as portraits of Yukio Aoshima and other entertainer-turned-politicians that vividly capture their distinctive characteristics.

Other notable works from the retrospective are: the pop-art like "Ad/ Balloon" series (1966); the "Birth" series (1968), which combines natural landscapes and human bodies to create objects with surrealistic beauty; the "Tokyo Nude" series (1986-1992), which traces the transformation of the capital; and the "Atokata" series (2011-2018), which depicts scenes of devastation immediately after the Great East Japan Earthquake.

"Meaning of the House" (1972-1975) is a series presented at the 1976 Venice Biennale, showing houses that are being lost but still retain a lived-in feel.

"I entered the photography industry as a youth when it was shining bright, and I happened to be there when photography was evolving rapidly, mainly in magazines. As a result, such a unique photographer was born. Times like that will not come again and there will be no photographer like me again," Shinoyama said. "It's like I felt accountable to keep records of my times using photography."

The retrospective runs until Aug. 15. The venue is closed on Mondays except national holidays, in which case it is closed on the following day.

For more information, visit the official website at (https://topmuseum.jp/e/contents/exhibition/index-4020.html).