Life in 2100: unimaginable heat, storms off the charts 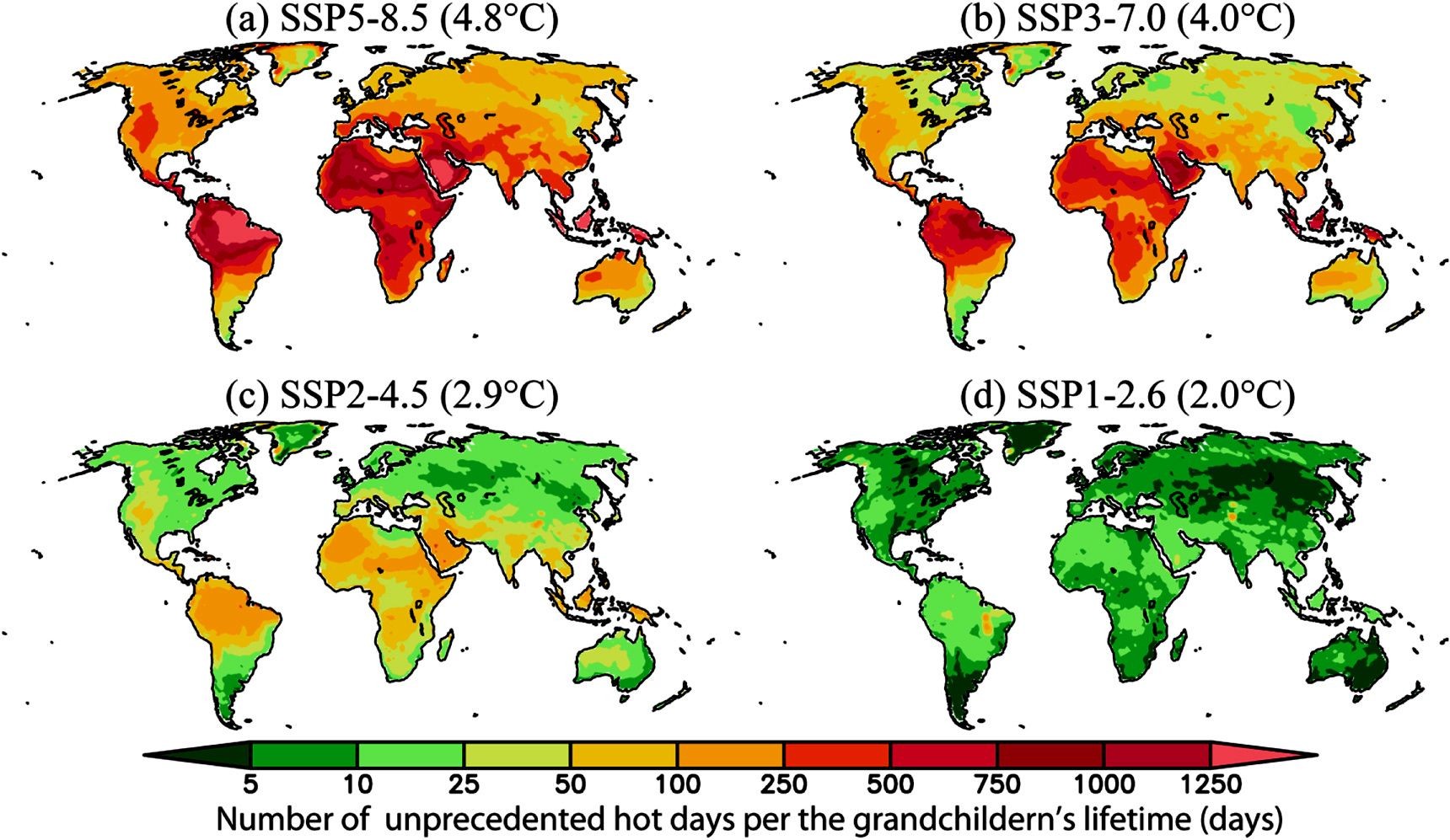 A research team’s 2021 predictions on how often today's grandchildren will be exposed to extreme heat waves never experienced by their grandparents under different scenarios marked by differing global average temperature rises in 2100 from pre-industrial levels, which are shown in parentheses (From the research team’s thesis)

A computer simulation done in Japan of extreme weather conditions over the next 80 years paints a nightmarish picture of what's in store for today's young generation and their children.

It shows they will experience withering heat wave conditions on a scale their grandparents never experienced, along with raging storms: Not just once or occasionally, but on hundreds of occasions.

The computerized forecast by scientists from the National Institute for Environmental Studies, Kyoto University and Ritsumeikan University, also in Kyoto, presents a scenario that seems unimaginable if global warming goes largely unchecked and rises by 4.8 degrees by 2100.

“Torrential rainfalls and heat waves exacerbated by global warming have noticeably increased in recent years,” noted Hideo Shiogama, the team leader and a division head at the NIES. “The trend looks likely to continue, which will unfairly impact different generations.”

The researchers compared those born in 1960 in Japan who became grandparents at age 60 and lived to be 80 years old with the generation that their grandchildren belong to, on the assumption they also live to be 80.

The new generation and their offspring will face extreme maximum daytime temperatures on numerous occasions if the temperature rise goes unchecked, the study found.

The scenario was based on 24-hour rainfall as it is now and what it would be if the average global temperature rises by as much as 4.8 degrees compared with pre-industrial levels.

The scientists developed four scenarios in which the average global temperature rises by between 2 and 4.8 degrees by 2100 compared with the pre-industrial period.

The findings suggest that the new generation and their offspring will experience unprecedented heat waves that their grandparents never faced. The scientists said that extreme heat conditions could occur 400 or so times throughout a person's lifetime if temperatures rise by 4.8 degrees and insufficient steps are taken to thwart global warming.

Torrential rainfall at levels their grandparents' generation never experienced was estimated to strike on around three occasions.

If the average global temperature increase is curbed to 2 degrees, the debilitating heat and unheard of rainfall will occur no more than 10 times and 1.5 times, respectively, the study found.

The team also made estimates for other parts of the world.

With the 4.8-degree temperature rise, more than 1,000 unprecedented heat waves and five or more downpours of mammoth proportions were forecast for the grandchildren’s age group in Southeast Asia, Africa and some tropical zones.

The team’s findings were published in the international academic journal Environmental Research Communications on June 1 at (https://doi.org/10.1088/2515-7620/ac0395).

With current levels of greenhouse gas emissions, the world’s mean temperature is expected to rise by 3 degrees or more by 2100.

Japan is one of more than 120 countries that has pledged to reduce greenhouse gas emissions to zero by 2050 through massive tree planting programs, technological change and other means to keep the increase to 2 degrees, or ideally 1.5 degrees.

“Children born in 2020 who live to be 80 years old will continue to be influenced by climate changes until 2100,” Shiogama noted. “You may not be able to deem the problem as your own one, but I want you to know this is not a story to come in some distant future but involves the lives of the children and grandchildren of adults today.”