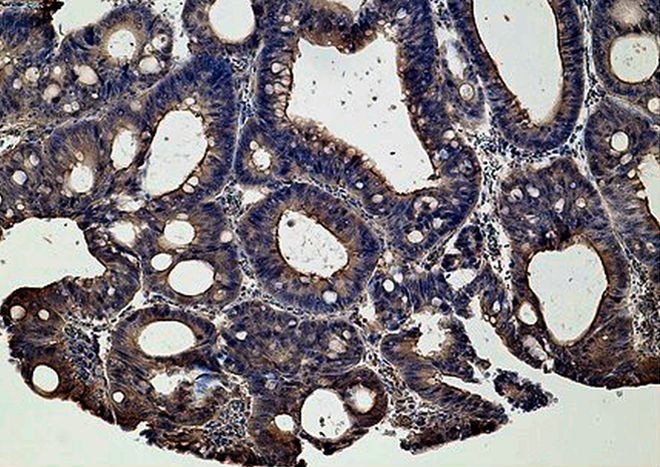 An increased amount of the TCTP protein is confirmed in humans’ colorectal cancer. (Provided by the Department of Inflammology of the University of Tokyo’s Research Center for Advanced Science and Technology)

Researchers said they have ascertained how cancer cells form a surrounding protective layer that enables the disease to spread even after the cells have died.

The key is a protein called TCTP, which hinders the body’s immune system from attacking the cancer. Inhibiting the functions of TCTP could lead to the development of new treatments for tumors, according to the team at the University of Tokyo’s Research Center for Advanced Science and Technology.

“Figuring out the mechanism of how immune cells weaken around tumors may help to create a new anti-cancer agent to inhibit the process,” said Hideyuki Yanai, a project associate professor of molecular immunology at the institute.

Cancer cells can emerge even in healthy bodies, but they are normally attacked and killed by immune cells to protect the individual’s health.

However, cells that hinder the immune system from functioning properly congregate around tumors at times, creating conditions that make it easier for the cancer to spread. How this occurs was previously unknown in detail.

In the team’s experiments, normal cancer cells proliferated after they were injected in mice. But when the cancer cells were transplanted after the TCTP protein was rendered nonfunctional, the scientists discovered the tumor’s spread was mitigated.

Further research confirmed that immunosuppressive cells cannot congregate in the absence of TCTP. A larger amount of a kind of cancer-attacking immune cell, known as the lymphocyte, was confirmed as well.

The researchers also found that tumors shrank in mice after they were administered a drug that stops TCTP activity. Combining the agent with an immunotherapeutic drug for cancer proved even more effective.

The TCTP mechanism in mice is believed to be similar in humans because an increased volume of the protein was found in patients suffering from colorectal cancer.