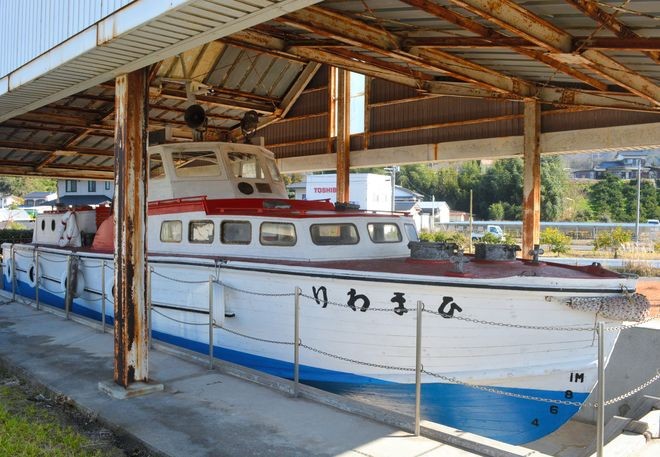 Himawari, a library ship which had visited islands in the Seto Inland Sea, is on display in Onomichi, Hiroshima Prefecture, in February. (Asahi Shimbun file photo)

A library ship named Himawari (Sunflower) used to make the rounds of the islands of the Seto Inland Sea in Hiroshima Prefecture.

At each port of call, the vessel remained for just 40 minutes for patrons to come aboard and choose their books.

"Waves of the Danube," a well-known Romanian waltz, was played on the wharf to announce the ship's arrival. As soon as the strains were heard, school children and others would come running.

The Seto Inland Sea islands of Hiroshima were home to 200,000 residents, but there was no public library.

But since the prefecture's outlying rural areas were being serviced by a library bus, the prefectural library in 1962 started sending Himawari to 19 islands in response to the wishes of book-loving islanders.

After logging a total operating distance equivalent to circling the globe 2.5 times, the ship was retired in 1981, by which time there were bridges spanning most of the islands.

The vessel remained in dock at one of its former ports of call at Ikuchijima island, but the condition of the hull continued to deteriorate year by year, and the city of Onomichi decided to scrap it six years ago.

But a group of citizens campaigned for its preservation, sprucing it up with fresh coats of paint.

And great news arrived earlier this month, when the Japan Society of Naval Architects and Ocean Engineers designated Himawari as a Ship Heritage.

"What a lovely surprise that this ship has earned the same status as Kanrin Maru on which Katsu Kaishu sailed," beamed Akira Nagai, 76, a local doctor who led the preservation campaign.

Katsu (1823-1899) was a prominent Japanese statesman and naval engineer during the latter years of the Tokugawa Shogunate and early Meiji Period.

On Ikuchijima island, I heard a song dedicated to Himawari. The lyrics go to this effect: "Books have arrived for everyone/ For older gents in the lemon orchards/ And for mothers with babies in their arms."

I hadn't felt such a sense of exaltation in years.

When I was young, every new book expanded my world. But since it became possible to purchase books and magazines online, I began to forget the joy of encountering new stories.

Aboard Himawari, I saw that it had been lovingly repaired from bow to stern, and its bookshelves had been restored, too.

I imagined hearing the cheers of youngsters who had waited on the wharf for their books.