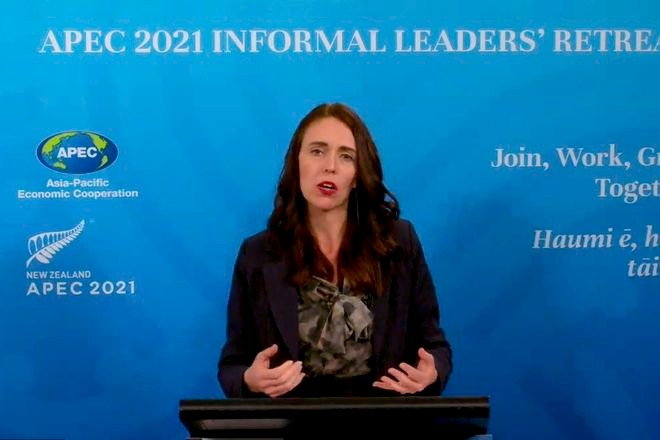 In this image from video, New Zealand Prime Minister Jacinda Ardern, APEC 2021 chair, speaks during a news conference in Wellington on July 17 about the Informal Leaders' Retreat virtual conference. (APEC2021 via AP)

Leaders of Asian Pacific nations agreed on Friday to step up COVID-19 vaccination sharing as China said it has pledged $3 billion in international aid to support coronavirus response efforts in developing countries.

“There were two things that came through very strongly from the leaders. One was that this pandemic has a while to run and that there is significant work by all of us to be done, and it needs to look beyond our domestic borders,” said New Zealand Prime Minister Jacinda Ardern, who hosted the informal retreat. “The second strong theme was agreement and acceptance ... that this will not be the last pandemic we experience and that preparedness is critical.”

Xi told leaders in a pre-recorded message played during their private session that Beijing would spend $3 billion to help poorer countries respond to COVID-19 over the next three years, according to China’s official Xinhua News Agency. China reports it has provided more than 500 million vaccine doses to other developing countries.

Vaccine sharing has proven to be a divisive issue among members of the forum, which says its primary goal is to support sustainable economic growth and prosperity in the Asia-Pacific region.

The Biden administration has fallen short of its goal of delivering 80 million vaccine doses to the rest of the world by the end of June due to a host of logistical and regulatory hurdles that have slowed the pace of U.S. efforts.

Biden told leaders during the meeting that he was committed to delivering more than 500 million vaccine dose to countries around the globe, according to the White House, which said the administration's "singular goal remains saving lives.”

“He made clear that the United States is donating our vaccines, not selling them, and underscored the importance of not attaching any political or economic conditions to the provision of vaccines,” the White House said in a statement.

Taiwan, an APEC member that China claims as a renegade territory, has accused Beijing of tying the delivery of coronavirus vaccines to political demands. The government of the self-ruled island says China has intervened to block vaccine deliveries to Taiwan from fellow APEC members Japan and the United States.

The leaders also pledged to move forward on action to lower costly tariffs that complicate the movement of vaccines across borders ahead of an APEC meeting set for November. Vials, syringes and packaging frequently face significant tariffs, which Ardern described as “a very real problem that APEC economies have the ability to remove.”

Biden had planned to use the retreat to talk to fellow leaders about his administration’s efforts to serve “as an arsenal of vaccines to the world” and discus how members of the alliance can collaborate to bolster the global economy, according to a senior Biden administration official who spoke on the condition of anonymity because they were not authorized to comment publicly.

The U.S. has shipped more than 53 million doses of COVID-19 vaccines to more than 30 countries and territories, with plans to ship at least 30 million more as soon as recipient countries sort out regulatory and logistical hurdles. They mark the Biden administration’s down payment on a plan to buy and donate 500 million more doses for the world over the coming year.

The U.S. has donated 4.5 million vaccine doses to Indonesia, 2 million to Vietnam and 1 million to Malaysia, and 3.2 million doses will soon be delivered to the Philippines. The White House says donations to Thailand, Laos, Cambodia and Papua New Guinea will soon be delivered. Laos and Cambodia are the only countries among those eight vaccine recipients that are not APEC members.

The “important meeting” came at a critical time as the world is facing a resurgence in COVID-19 infection numbers and international cooperation against the pandemic had entered a new stage, said China’s Foreign Ministry spokesperson Zhao Lijian.

“We hope all parties can uphold the vision of an Asia-Pacific community with a shared future, carry forward the Asia-Pacific partnership, send a positive message of fighting the coronavirus with solidarity and deepen economic recovery and cooperation,” Zhao said.

APEC nations lost more than 80 million jobs during the pandemic as the global economy lilted amid restrictions and lockdowns.

One of his first high-profile acts of diplomacy as president was hosting a virtual summit with fellow leaders of the Quad--Australia, India and Japan--a group central to his efforts to counter China’s growing military and economic power. And he hosted Suga and South Korea President Moon Jae-in for the first in-person foreign leader meetings of his presidency. South Korea is a APEC member, and India is the only country in the Quad that is not.

The White House said Biden emphasized the importance of multilateral cooperation and his commitment to a free and open Indo-Pacific.

"President Biden also discussed the importance of investing in better global health security and preparedness so that we are ready the next time we face a pandemic," it said in a statement.

Putin told the group that global barriers to vaccine production and deliveries needed to be removed, and Japanese Prime Minister Yoshihide Suga expressed his determination to hold a safe and secure Olympics.

Despite their show of resolve, there are tensions among APEC members, most notably between the West and China - over issues ranging from the origins of the coronavirus to trade, Xinjiang, Hong Kong and the South China Sea.

Just as the meeting concluded, Washington announced sanctions on seven Chinese individuals over Beijing's crackdown on democracy in Hong Kong, its latest effort to hold Beijing accountable for what it calls an erosion of rule of law in the former British colony.

The United States and China have a troubled relationship and they have had little high-level, face-to-face contact under the Biden administration since a March meeting between senior officials in Alaska, where the Chinese side expressed anger at U.S. sanctions announced just ahead of the talks.

White House spokeswoman Jen Psaki said China's Xi delivered pre-recorded video remarks at the meeting and was not in attendance. The Chinese embassy in Washington did not respond to a request for comment.

The APEC grouping includes the world's three largest economies and impoverished nations such as Papua New Guinea, as well as members at vastly different points in the COVID-19 cycle, providing further challenges for building consensus.

That consensus model of APEC has been tested in recent years, with the group unable to agree on a communique at their 2018 meeting in Papua New Guinea, driven by differences between China and the then U.S. president, Donald Trump.

The 2019 APEC meeting in Chile was cancelled due to protests while the one in Malaysia last year was side-tracked as officials hastily organized a virtual meeting as the pandemic locked down the world.

In June, APEC trade ministers agreed to review trade barriers and expedite the cross-border transit of COVID-19 vaccines and related goods, but stopped short of a broad commitment to remove tariffs which New Zealand was pushing for.

There have been over 50 million cases of COVID-19 within APEC's borders, with over 1 million deaths. APEC-wide GDP contracted by 1.9% in 2020.