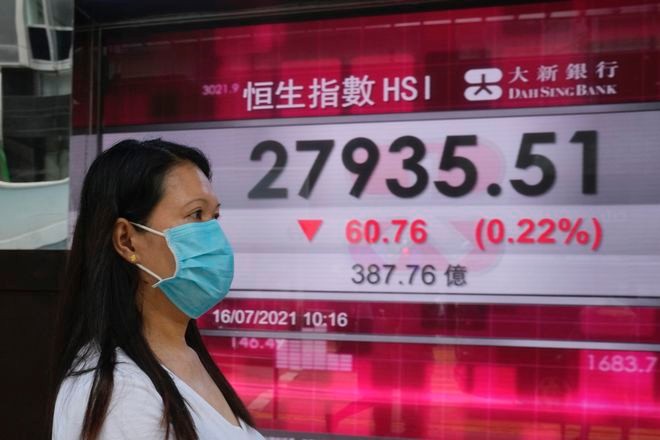 A woman wearing a face mask walks past a bank's electronic board showing the Hong Kong share index in Hong Kong on July 16. (AP Photo)

WASHINGTON--The Biden administration issued a blanket warning Friday to U.S. firms about the risks of doing business in Hong Kong as China continues to clamp down on political and economic freedoms in the territory.

Four Cabinet agencies--the departments of State, Treasury, Commerce and Homeland Security--released the nine-page advisory that alerts companies about the shifting legal landscape in Hong Kong and the possibility that engaging with Hong Kong business could incur reputational and legal damages.

At the same time, Treasury announced sanctions against seven Chinese officials for violating the terms of the 2020 Hong Kong Autonomy Act, which calls for asset freezes and other penalties against those who participate in the crackdown.

President Joe Biden had previewed the new advisory Thursday, telling reporters at the White House that the business environment in Hong Kong is “deteriorating” and could worsen.

“Businesses, individuals, and other persons, including academic institutions, research service providers, and investors that operate in Hong Kong, or have exposure to sanctioned individuals or entities, should be aware of changes to Hong Kong’s laws and regulations,” said the notice, which is titled “Risks and Considerations for Businesses Operating in Hong Kong.”

“This new legal landscape ... could adversely affect businesses and individuals operating in Hong Kong. As a result of these changes, they should be aware of potential reputational, regulatory, financial, and, in certain instances, legal risks associated with their Hong Kong operations,” it said.

Secretary of State Antony Blinken highlighted the advisory in a statement marking the one-year anniversary of the passage of China's new national security law that he said had a profoundly negative effect on Hong Kong.

Blinken said the risks to business include "potential electronic surveillance and lack of data privacy, reduced access to information, and potential retaliation against companies for their compliance with U.S. sanctions.”

“The business advisory outlines these emerging risks to inform U.S. individuals and businesses and recommends increased awareness and due diligence," he said.

Hong Kong's government responded with a statement calling the U.S. advisory “totally ridiculous and unfounded fear-mongering” driven by ideology. "The main victims of this latest fallout will sadly be those U.S. businesses and U.S. citizens who have taken Hong Kong as their home,” the statement said.

The American Chamber of Commerce in Hong Kong, meanwhile, responded to the advisory by acknowledging the business environment “is more complex and challenging” but saying that it would continue its work.

“We are here to support our members to navigate those challenges and risks while also capturing the opportunities of doing business in this region,” it said in a statement. It added that “Hong Kong remains a critical and vibrant facilitator of trade and financial flow between the East and West.”

The United States under both the Trump and Biden administrations has determined that since the passage of the national security law, Hong Kong no longer enjoys the significant autonomy from mainland China that Beijing had pledged to respect for 50 years when it assumed control of the former British colony in 1997.

As such, Hong Kong no longer enjoys preferential U.S. trade and commercial privileges and certain officials in Hong Kong have been hit with U.S. sanctions for their actions in cracking down on democracy.

China is one of the rare areas in which the Biden administration has largely hewed to Trump's policies.

Friday's warning came on the heels of a similar advisory issued earlier this week reminding American companies about potential sanctions liability if they engage in business with Chinese entities that operate in the western Xinjiang region, where China is accused of widespread repression of Uyghur Muslims and other minorities.

A spokesperson for the Commissioner of China's Ministry of Foreign Affairs in Hong Kong in a statement late on Friday strongly condemned the U.S. actions, saying they were blatant interference in Hong Kong and China's internal affairs.

"(U.S.) worries about Hong Kong's business environment is fake; its attempt to destroy Hong Kong's prosperity and stability, endanger China's national security, and hamper China's development is real," he said in the statement.

He added the implementation of the security law has reinforced Hong Kong's position as an international financial and business hub, and U.S. sanctions and pressures are no more than "a waste paper" which will not stop China from growing.