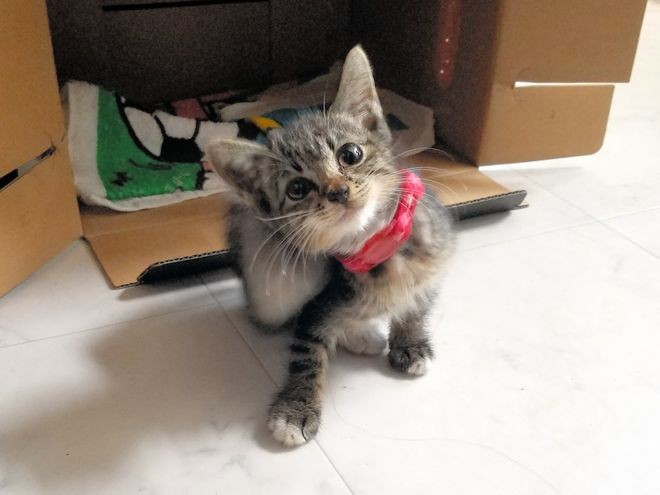 The kidneys of a kitten begin to worsen the moment the animal is born, according to professor Toru Miyazaki. (Ryosuke Nonaka)

When the coronavirus pandemic brought plans for a clinical trial for a kidney disease treatment for cats to a halt, feline lovers opened up their wallets.

Donations abruptly began to pour in for research by a team of University of Tokyo scientists who are working to develop a therapy.

The project generated some 2,900 donations, totaling about 30 million yen ($272,000), in slightly over two days. Offers for more donations continue to pour in.

The University of Tokyo usually receives only about 10,000 donations a year. Officials of the secretariat of the university’s recipient fund said the latest rush is unprecedented in history.

Many pet cats die of renal failure. It is known that other animals of the cat family, including lions and cheetahs, are also prone to developing kidney disease, although why they do so remained a mystery.

Toru Miyazaki, a professor of immunology with the University of Tokyo, and his colleagues discovered a protein called “apoptosis inhibitor of macrophage” (AIM), which exists in the blood of different animals, including humans and mice.

They found that AIM works to remove waste substances such as dead cells, which clog the kidneys, thereby helping to maintain renal function.

Miyazaki and his coworkers found that animals of the cat family also have the AIM protein, except that it exists in such a state that it does not properly fulfill its function. That is one of the factors behind the proneness of cats to kidney disease, they reported in a publication in 2016.

“A cat’s kidneys begin to worsen the moment the animal is born, and they develop renal failure over time, because AIM does not function in them,” Miyazaki explained.

The professor set the goal, on the basis of the research results, of developing functional AIM as a therapeutic drug for feline kidney failure. He secured a prospect for conducting clinical tests on cats, with the support of a company, to verify the drug’s efficacy and safety.

“We thought we would be able to put the drug on sale early next year if everything went fine,” Miyazaki said.

The COVID-19 pandemic, however, halted the plan for the clinical trials.

“The clinical tests would cost hundreds of millions of yen at the least,” Miyazaki said. “It has become difficult for the company, facing a dire financial situation under the pandemic, to set out on a new business project.”

Jiji Press Ltd. interviewed Miyazaki on his research project and its current state and distributed a news article on them, which was posted July 11 on the news portal of Yahoo! Japan Corp., operator of a major online search engine.

No sooner had it gone online than the University of Tokyo was flooded with inquiries from pet cat owners and cat lovers across Japan, who wanted to find out how they could donate to the project.

The secretariat of the University of Tokyo Foundation, which handles donations, quickly added Miyazaki’s research project to a list of donation purposes that can be designated by the donor.

Donor messages are shown on the University of Tokyo Foundation website (https://utf.u-tokyo.ac.jp/voice/ayn).

“May (this project) bring happiness to cats in the future,” one of them says.

“I hope the drug will become available as soon as possible so fewer cats will be suffering,” says another.

“I hope cat kidney disease will be overcome, although it was too late for my own cat,” a third message reads.

Notably, many of the donors have declined to be given a receipt, which is required for getting a tax deduction for a donation, the officials said.

“Many are likely making donations out of a genuine desire to provide support,” one secretariat official said.

Miyazaki first learned about the huge outpouring of support when he got a phone call from the secretariat saying that something quite uncommon was occurring.

In fact, Miyazaki had begun to receive frequent requests, after his team’s research results went public in 2016, from people who asked him, some of them in person and others by email, to start a crowdfunding project for them so they can support his research.

But Miyazaki decided against starting one, partly because he had nothing to provide in return, and partly also because, this being about drug development, he could not give a 100-percent guarantee that he would live up to the expectations.

“I now realize that expectations are so strong on the part of pet cat owners,” Miyazaki said of the latest, unexpected rush of donations. “I am feeling responsible for proceeding with my research project.”

He added, “I have received emails written in earnest, one containing the phrase ‘as soon as possible’ and another saying, ‘Please have (the drug) used on my pet cat, who suffers from kidney disease.’ I will find ways to make sure the donations will be used to help put AIM to practical use.”