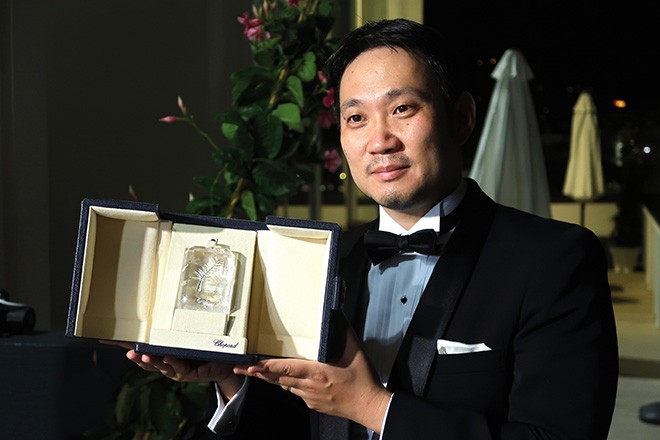 Filmmaker Ryusuke Hamaguchi poses for a photo after winning the Best Screenplay Award for his movie “Drive My Car” at the Cannes International Film Festival on July 17. (Misuzu Sato)

CANNES, France--Filmmaker Ryusuke Hamaguchi and scriptwriter Takamasa Oe won the Best Screenplay Award for their movie “Drive My Car” at the Cannes International Film Festival, a first for a Japanese.

The film is an adaptation of novelist Haruki Murakami’s short story of the same name. It was screened in competition in the feature film category.

“I would like to express my gratitude first to Haruki Murakami, who provided inspiration for the movie,” Hamaguchi said during the awards ceremony before a highly appreciative mask-wearing audience here July 17.

"Drive My Car" is said to be one of Hamaguchi's favorite Murakami stories.

He also gave credit to Oe for giving him constant support.

“I was only able to complete the screenplay for the 179-minute film thanks to his encouragement,” Hamaguchi said, before giving praise to his international cast.

“The reason this movie’s screenplay won acclaim is because our actors gave incredibly excellent performances,” he said, mentioning each of the cast by name. “I would appreciate it greatly if you give a big hand of applause to our cast and staff.”

Aside from Best Screenplay, the film also won the International Federation of Film Critics’ Prize and the Ecumenical Jury Prize, which is awarded by a jury of Catholic and Protestant film specialists.

The movie, centering on a stage actor and director who is unable to come to terms with the death of his wife, describes his struggle to move toward rebirth during his conversations with a woman he hires to drive him around.

The main character is played by Hidetoshi Nishijima and Toko Miura plays the driver. The cast includes Masaki Okada, Reika Kirishima and actors from South Korea and Taiwan.

Hamaguchi, 42, has long been regarded as a next-generation leader in Japanese cinema, having won acclaim at major international film festivals back to back.

He co-wrote the screenplay for “Wife of a Spy,” a movie by Kiyoshi Kurosawa who received the Silver Lion award for best director at the Venice Film Festival in Venice last September.

In March this year, Hamaguchi received the Silver Bear Grand Jury Prize at the Berlin International Film Festival for his "Wheel of Fortune and Fantasy.”