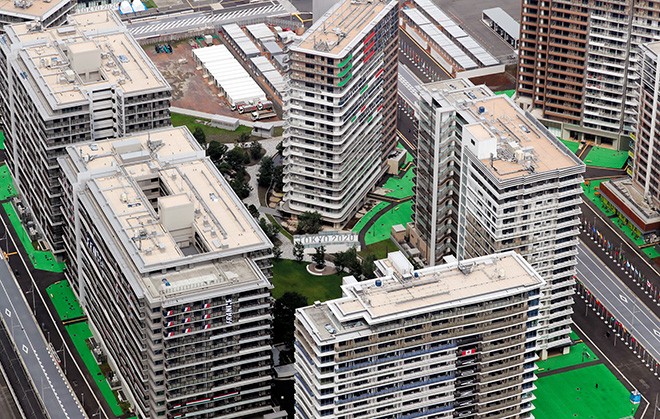 The Olympic Village for the Tokyo 2020 Olympics opens in the capital’s Chuo Ward on July 13. (Hikaru Uchida)

Organizers said the two athletes are from the same country and sport as a delegation official who tested positive July 17 and also resides in the Village.

The athletes and the official are now self-isolating, according to organizers.

As a safety precaution, other members of the team and delegation were asked to remain in their rooms, which they are doing.

Organizers did not clarify if the infected pair will be allowed to compete in the Games. The Opening Ceremony will be held July 23.

They also did not disclose the names, ages and nationalities of those whose infections were confirmed, citing their privacy.

Olympians and officials were allowed, in principle, to move into the Village five days prior to the start of the events. But there were some exceptions as communities that were supposed to be their training camps in Japan declined to host them while infections nationwide continue to surge.

The competition schedule for the infected athletes as well as their prospects of being able to compete remain unclear.

Residents of the Village are required to provide saliva samples for daily antigen tests, based on the Playbook on COVID-19 protocols.

Organizers said the total of tests to be conducted during the Olympic and Paralympic Games would top 500,000.

Organizers felt compelled to enforce daily testing due to the spread of more contagious variants in Japan and around the world. Initially, they had planned to conduct tests at least once every four days.

Village residents are required to submit saliva samples either at 9 a.m. or 6 p.m. that day. Results come back about 12 hours later.

The number of infections linked to the Games since July announced by organizers now totals 55.