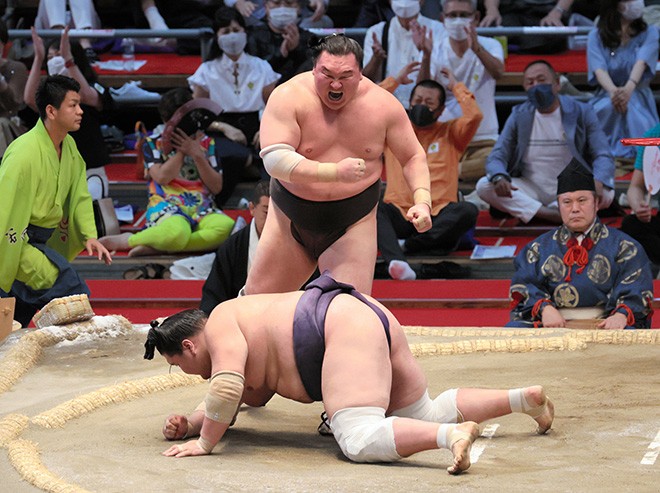 Yokozuna Hakuho defeats ozeki Terunofuji with a forearm throw in the last bout of the Nagoya Grand Sumo Tournament on July 18, extending his career championships to a record 45. (Takeshi Iwashita)

NAGOYA--After pulling out of six meets in a row, yokozuna Hakuho clinched his 45th career championship at the Nagoya Grand Sumo Tournament with a 15-0 record on July 18, overpowering ozeki Terunofuji in a fierce bout, as rumors swirled about his possible impending retirement.

Terunofuji finished with a 14-1 record, which looks certain to guarantee him promotion to sumo's highest rank, joining Hakuho.

“Before the tournament, I never expected to win the championship with a record of no defeats at this age,” Hakuho, 36, said in an interview after he was handed the Emperor’s Cup. “But with this victory, I am feeling I can fight again.”

The tournament turned out to be a white knuckle contest between Hakuho and Terunofuji, as both had remained undefeated until that point.

Hakuho entered the meet held at the Dolphins Arena here to convince the sumo world of his relevance in his 15th year as yokozuna. Hakuho is a sole yokozuna, whose career was at stake. The last time he had the Emperor’s Cup in his hands was in March last year.

The Japan Sumo Association's yokozuna advisory body issued a stern warning against him in November after he repeatedly pulled out of tournaments due to injuries. He withdrew from 14 of 20 contests held between the beginning of 2018 and in May.

Ozeki Terunofuji, 29, set out to cement his promotion to yokozuna by winning his third straight career championship at this tourney.

Terunofuji’s return this year to ozeki, sumo's second highest rank, is impressive. He reached ozeki status at the age of 23 and stayed in the rank from 2015 to 2017.

However, he was demoted to the jonidan division, the second-lowest tier, after missing out on competitions due to persistent knee injuries and diabetes.

The Japan Sumo Association is set to promote Terunofuji to yokozuna after he achieved two consecutive championships and his 14-1 record at the latest meet. The JSA will call an emergency meeting to formally decide whether to approve his promotion.

Both Hakuho and Terunofuji hail from Mongolia.