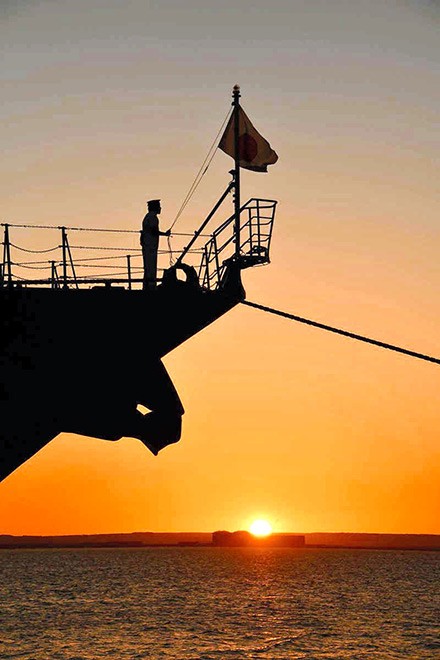 A crew member lowers the flag at the bow of a naval vessel as the evening sun sinks below the horizon. (From the Maritime Self-Defense Force’s official Twitter account)

For those dreaming of sailing around the globe, photographers aboard naval vessels are offering a sneak preview of life on the high seas.

Images of a ship silhouetted against the sunset, crew members illuminated by the moon and other motifs shot by Maritime Self-Defense Force members are drawing attention on social media.

“I would like people to enjoy beautiful sights seen by MSDF members deployed around the world,” said Yuji Shinoda of the Maritime Staff Office’s public relations section, who is responsible for posting photos on Twitter and Instagram.

A picture released on June 23 shows the shadows of the bow of a ship and a crew member lowering the flag as the evening sun sinks below the horizon to render the sky orange.

Posted two days earlier were images of a naval vessel entering the Port of Colombo for a young personnel training program. The Sri Lankan port was lit up in blue, green and orange, while crew members were captured in the moonlight.

The MSDF started posting photos in 2017 after it opened its Instagram account. A book featuring pictures taken by MSDF members was published last year.

A few members are assigned to photography duty in each unit deployed worldwide to record MSDF activities.

Shinoda, 35, served in such a position for more than 10 years.

While he initially knew little about photography, Shinoda refined his skills by taking 100,000 images over six months during a crackdown on pirates off Somalia.

Shinoda said he selects striking images taken from unusual angles because most pictures are snapped from naval vessels and the compositions do not differ greatly.