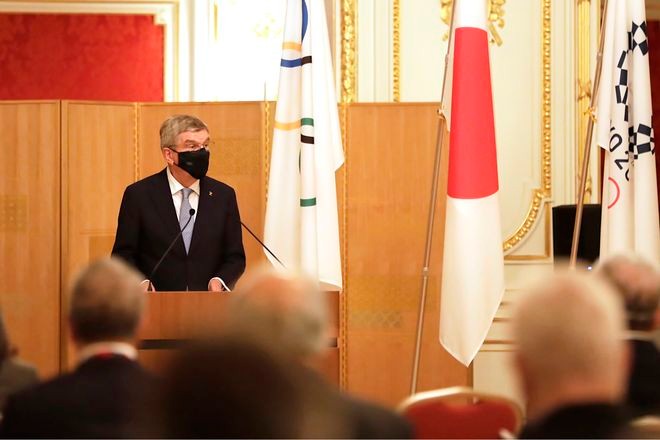 IOC President Thomas Bach, center, speaks during a welcome party for Bach and IOC officials at Akasaka Palace in Tokyo on July 18.(Courtesy of Tokyo 2020 via AP)

LONDON--Six British track and field athletes and two staff members have been forced to isolate after being identified as close contacts to an individual who tested positive for COVID-19 on their flight to Japan, the BOA confirmed on Sunday.

"The British Olympic Association (BOA) can confirm that six athletes and two staff members from the athletics team, who through no fault of their own have been identified as close contacts of an individual--not from the Team GB delegation--who tested positive for COVID-19 on their inbound flight on 15 July 2021," the BOA said in a statement.

It said the group had been flagged up through Tokyo 2020's reporting service and were now undergoing a period of self-isolation in their rooms at the team's preparation camp. None of the six athletes were named.

"The group all tested negative at the airport and have continued to test negative upon arrival into the country," the BOA added, saying it was operating its own extensive COVID-19 testing protocols and mitigation measures.

"This is disappointing news for the athletes and staff, but we absolutely respect the protocols in place," the British team's Chef de Mission, Mark England, said.

"We will offer them every support during this period and we are hopeful that they will be able resume training again soon."

It follows Tokyo Olympics organizers on Sunday reporting the first COVID-19 cases among the competitors residing in the athletes' village, raising concerns it could become a super-spreader event with five days to go until the opening ceremony.

South Africa confirmed four positive cases, including three in its soccer squad--two players and an analyst. The country's sevens rugby coach Neil Powell also tested positive on arrival in Japan and is in isolation.

In total, 11,000 athletes are due to spend time living in the village but will spend fewer days in Japan than they would at any other Olympic Games due to COVID-19 restrictions.

Postponed last year due to the pandemic, the Games have little public support in Japan amid widespread fears about a further spread of the coronavirus.

On Saturday, International Olympic Committee President Thomas Bach acknowledged the concerns in the Japanese public but urged them to welcome the athletes.