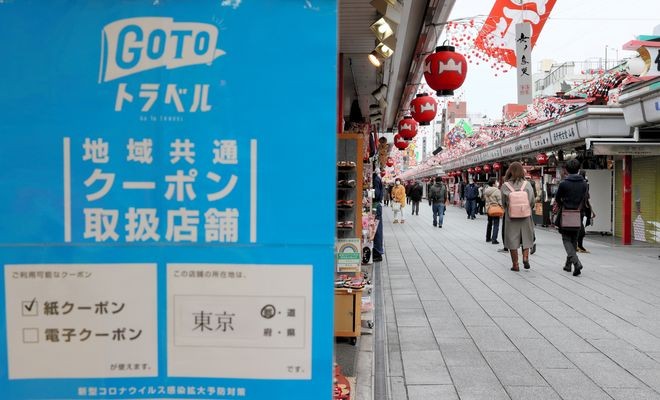 A poster promoting the Go To Travel program is seen in the Asakusa district in Tokyo’s Taito Ward on Dec. 28, 2020. Expenses for the program were also included in the supplemental budget, but due to lack of sufficient screening on the feasibility, its implementation is now on hold. (Asahi Shimbun file photo)

The government’s wanton use of supplementary budgets ensures the failure of its plan to cure its budget woes even if it manages to make initial budgets appear capable of achieving fiscal health.

If each ministry and agency cuts its budget request for existing programs by 10 percent, they are allowed to request amounts three times of the reductions for these four areas.

The new coronavirus pandemic is causing significant social and economic changes. This requires the government to rethink its policy priorities and tackle new challenges.

But Japan is facing a momentous fiscal crisis. The government needs to make sharp cuts in budget expenditures in low priority areas to secure funds for high priority policies.

The baby boomers start turning 75 or older in the next fiscal year, which means even faster growth in social security spending. The government needs to take all possible steps to curb this growth as much as possible, including revising remuneration for medical treatment under the public health care insurance program and promoting use of lower-priced generic drugs.

As for the initial budget, the government’s Basic Policies for Economic and Fiscal Management and Reform, known as “honebuto no hoshin” (big-boned policy outline), calls for keeping growth in social security spending within the natural increase due to the aging of the population and maintaining other general expenditures at the same levels as those for the last fiscal year.

It is customary for the government to formulate an original budget in compliance with these rules to at least pretend to make a commitment to fiscal discipline.

The problem is that there are no such rules for supplementary budgets that have often been abused as a loophole to ramp up spending.

On the day after the Cabinet approved the budget request guidelines, Toshihiro Nikai, secretary-general of the ruling Liberal Democratic Party, said, “We need to consider (compiling a supplementary budget worth) nearly 30 trillion yen ($272.93 billion).”

As the pandemic has lasted well over a year and is clearly here to stay for a while longer, compiling extra budgets is a key policy challenge. It is vital to secure sufficient funds to support medical institutions, restaurants and bars, non-regular workers and others grappling with the effects of the health crisis.

The public finance law limits the purpose of formulating a supplementary budget to responding to unexpected situations such as natural disasters. In fact, however, outlays for certain policy initiatives, such as programs to better prepare the nation for major natural disasters and measures to deal with the impacts of the Trans-Pacific Partnership multilateral trade agreement, have been paid from supplementary budgets every year.

Extra budgets have been expanded to multi-trillion yen spending plans under the pretext of pumping up the economy. But the expenditures from these budgets have not been examined or evaluated rigorously.

Last year, Japanese consumers were effectively forced to save some 20 trillion yen in total as the pandemic restricted their shopping activities, according to the Bank of Japan. Once the virus is brought under control, consumer spending will bounce back on its own momentum.

Even if the government decides to take additional policy measures to stoke demand, it should carefully assess the appropriate scale of spending.

The government’s tax revenues for the last fiscal year surpassed its estimate by about 5.7 trillion yen due to stronger-than-expected recovery of export industries and other factors. But this is no reason for policymakers to grow complacent.

The government issued more than 100 trillion yen in new bonds in the last fiscal year. The administration and the ruling parties need to bear in mind that there is no room for wasteful spending of taxpayer money to woo voters before the upcoming Lower House election.