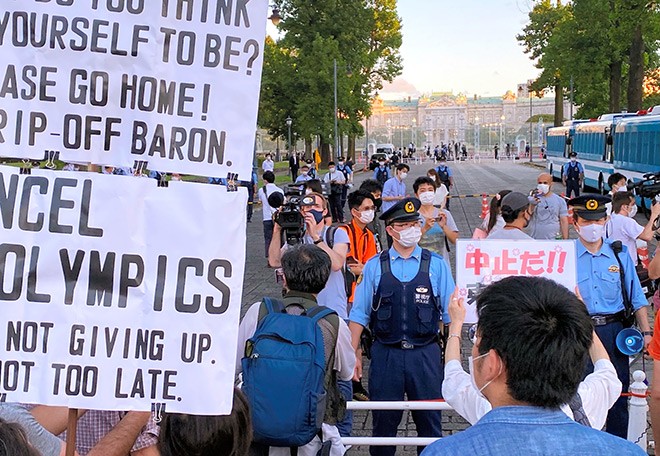 Protesters show their opposition to the Tokyo Olympics in front of the State Guest House in Tokyo’s Shinjuku Ward on July 11. (Yusuke Saito)

With just days to go until the Tokyo Olympics officially kick off, almost seven in 10 respondents said they believe the Games cannot be held safely, according to a new Asahi Shimbun poll.

The national telephone survey, conducted on July 17 and 18, quizzed respondents on whether they support holding the Olympics and found that just 33 percent are in support while 55 percent are opposed.

Consistently across all age groups, more people are against holding the Games than are for them being staged, the poll showed.

In Tokyo, where coronavirus cases are surging under a fourth state of emergency, 30 percent expressed support for the Games while 58 percent said they oppose holding them.

The survey was conducted by contacting landline and mobile phone numbers selected at random.

It received 628 valid responses, or 55 percent, of the 1,142 households contacted through a landline with at least one eligible voter.

There were 816 valid responses, or 42 percent, from 1,963 mobile phone numbers of eligible voters.