Lesser-known languages much sought after by online learners 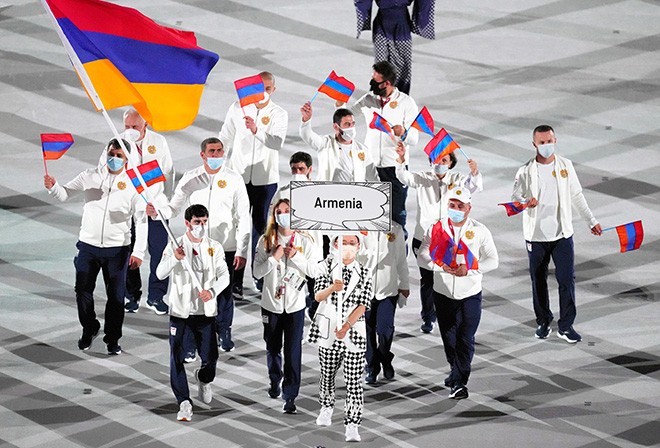 Athletes from Armenia walk during a parade at the Opening Ceremony for the Tokyo Olympics at the National Stadium on July 23. (Asahi Shimbun file photo)

Stay-at-home lifestyles prompted by the pandemic left many Japanese with time on the hands to pursue studies they might not have gotten around to.

Tokyo University of Foreign Studies expressed surprise at a sharp rise in the popularity of its online language classes not only for perennial favorite English, but for lesser-known languages such as Amharic, Akan and East Armenian.

To play a part in helping Japan become a multicultural inclusive society, the university has been hosting extension courses to teach languages, cultures and histories of other countries at its campus in the western Tokyo city of Fuchu and elsewhere.

Due to the difficulty of hands-on lessons with the spread of COVID-19, it started offering classes online from November.

For example, a beginner class for East Armenian, which is spoken in Armenia, Turkey’s neighbor, had an enrollment rate of 43 percent in the 2019 academic year ending in March 2020.

But the figure rose to 100 percent the following year after the class switched to online with the novel coronavirus pandemic in full swing.

The enrollment rate of a beginner course for Amharic, which is spoken in Ethiopia, rose to 95 percent from 38 percent, while the figure for an advanced class for Thai reading comprehension climbed to 86 percent from 60 percent.

“I’m glad to learn that so many people are interested in unique languages,” said Takayuki Yoshimura, a researcher in residence at Waseda University’s Institute for Russian and Easteuropean Studies, who serves as an instructor in East Armenian.

University officials believe that the popularity of online classes is due to the fact students have no need to go to classrooms in Tokyo and risk becoming infected.

The number of students from outside the Tokyo metropolitan area accounted for just 4 percent of the intake in the 2019 academic year. But when classes went online the following year, the figure rose to 25 percent, with 81 students joining lessons from overseas.

“Students who are interested can attend online classes in a casual manner without the need of going to Tokyo, and I’m also grateful because I can teach them from Kochi,” said Kyoko Koga, a Kochi University professor who teaches Akan, which is spoken in Ghana. “I’m also thinking about having a Ghanaian pairing up with me to teach the class, who currently lives in Japan, join the session from Ghana in the future.”

Many of the online classes are offered in 12 sessions for 20,200 yen ($183) with a maximum capacity of 21. Some classes start in late November with applications accepted from Oct. 20.

For more information, visit the university’s official website at (https://tufsoa.jp/).