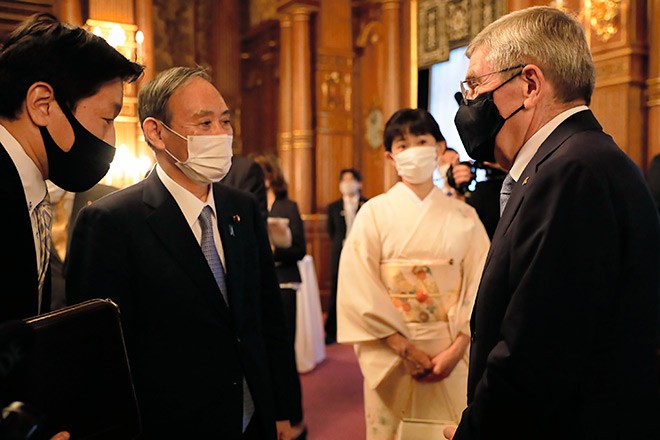 Prime Minister Yoshihide Suga, second from left, speaks to International Olympic Committee President Thomas Bach, right, during a reception held at the State Guest House, Akasaka Palace, in Tokyo on July 18. (Provided by the Tokyo Organizing Committee of the Olympic and Paralympic Games)

International Olympic Committee President Thomas Bach attended a swanky party thrown to welcome him to Tokyo ahead of the Games, but not everyone who showed up at the venue came to revel and greet him.

Protesters rallied on July 18 in front of the State Guest House, Akasaka Palace, in central Tokyo, to show their opposition to the Olympics and shouted, “We do not welcome you!”

The Tokyo Organizing Committee of the Olympic and Paralympic Games hosted a reception there to officially welcome Bach and other officials to Japan. Among the roughly 40 attendees were the committee’s president, Seiko Hashimoto, along with Prime Minister Yoshihide Suga and Tokyo Governor Yuriko Koike.

But as soon as the plan for the party was announced, many people expressed outrage on social media over the double standard. Residents are being urged to stay home and not congregate during Tokyo’s fourth state of emergency amid the pandemic, as COVID-19 cases surge in the capital.

But the committee went ahead with the high-profile shindig, saying that the event had been planned since before the pandemic began.

“We have taken adequate measures, so let us have (the party) as scheduled,” Hashimoto said.

The committee said that, taking the worsening coronavirus situation into consideration, it scaled down the event and the attendees did not wine and dine.

But that was not compelling to the several dozen people who came to the venue in Minato Ward to voice their discontent.

“Stop the nonessential party,” they yelled, employing the very term that the central and metropolitan governments have used ad nauseam to discourage people from going out amid the pandemic.

A woman in her 60s said, “Regardless of whether (we are in) the pandemic or not, these Olympics are filled with problems.”

She then mentioned the scandalous revelation that Keigo Oyamada, a composer involved with the Opening Ceremony, had boasted about how he bullied and abused his classmates in school and mocked people with disabilities.

“We have no other choice but to cancel the Olympics,” she said.

A 43-year-old company employee who passed by the palace said he disapproved of the organizers throwing a party “when many people have abstained from (doing the same).”

“I can understand how these protesters feel,” he said.

But the man said he holds no grudge against the Olympic athletes.

“They are innocent. But it is just that nobody can afford to feel festive.”

He likened the Olympics under the pandemic to “fireworks without an audience.”

“I wish they could postpone it for a little while longer,” he said.

(This article was written by Shuhei Nomura and Yusuke Saito.)