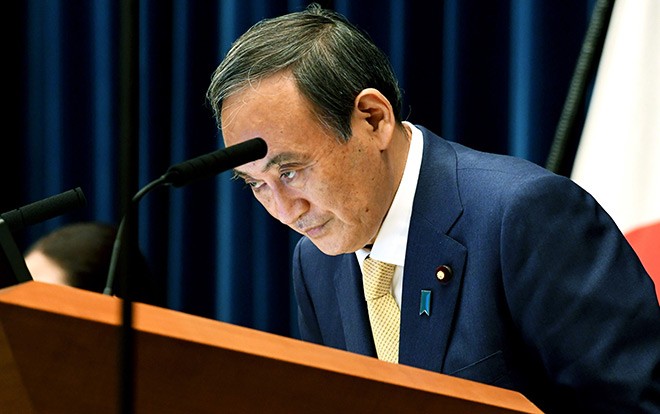 The approval rating for the Suga Cabinet dropped to a record-low 31 percent, reflecting increasing frustrations among the public over vaccine shortages and “ineffective” anti-virus measures, an Asahi Shimbun survey showed.

The rate was down from 34 percent in the previous survey in June, while the disapproval rating rose to 49 percent from 42 percent, according to the nationwide telephone survey of eligible voters conducted on July 17 and 18.

Thirty-five percent of men and 27 percent of women approved the Cabinet, the survey showed.

The government’s COVID-19 measures have been criticized since Prime Minister Yoshihide Suga formed the Cabinet in September last year.

Amid the latest resurgence of new infections, 65 percent of survey respondents “lowly evaluated” the government’s responses to health crisis, compared with 26 percent who “highly evaluated” them.

Concerning the COVID-19 vaccination program, a string of municipalities and workplaces have suspended their vaccination plans because of a shortage of doses.

Sixty-three percent of survey respondents thought that “the government is greatly responsible” for the supply problem, while 32 percent said it is “not so much responsible.”

Fifty-four percent of respondents “highly evaluated” the government’s vaccination efforts, down from 60 percent in the June survey.

For the declaration of the fourth COVID-19 state of emergency for Tokyo, the government asked alcohol wholesalers to halt any dealings with eating and drinking establishments that defy requests to stop serving alcoholic drinks. It also called on financial institutions to urge these businesses to comply with the requests..

After criticism erupted, the government withdrew the requests.

These actions “increased” the distrust of the Cabinet among 51 percent of respondents, while 45 percent said their distrust did “not increase so much.”

Only 33 percent believe the current state of emergency will be “effective” in preventing the virus from spreading, while 66 percent think the declaration will be “ineffective.”

Among voters in Tokyo, where the Olympics will start within days, 74 percent said the state of emergency will be “ineffective.”

In the May survey, 41 percent of all respondents said a state of emergency would be “effective.”

Suga’s term as president of the ruling Liberal Democratic Party will end in September.

Fifty-four percent of respondents said they want Suga to “continue his job until the term ends.”

Twenty-seven percent want Suga replaced before his term ends, compared with 14 percent who want him to continue in the post beyond the term, according to the survey.

In the April survey, 19 percent wanted him out before the term expires.

Among LDP supporters, 63 percent hoped Suga would remain at the post “until the term ends,” while 9 percent wanted a replacement before the term expires.

Only 26 percent “wanted him to continue to serve as president beyond the term.”

It received 628 valid responses, or 55 percent, of the 1,142 landline numbers of households with at least one eligible voter.