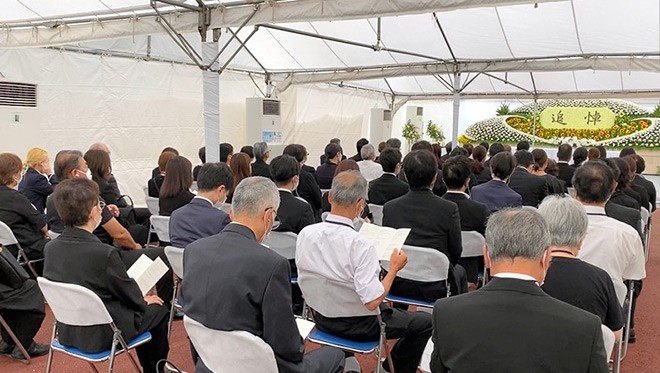 KYOTO--Mourners here on July 18 prayed for the victims of a deadly arson attack on Kyoto Animation Co. to mark the second anniversary of the tragedy.

The attack on the company’s No. 1 studio building in Kyoto’s Fushimi Ward on July 18, 2019, left 36 of its executives and employees dead and 32 injured, many of them seriously.

A tent was set up for a memorial service at the former site of the studio. About 70 attendees, including the bereaved families and Kyoto Animation officials, observed a one-minute moment of silence from 10:35 a.m., when the attack is believed to have occurred.

“It was an extremely tragic and indescribable experience,” Hideaki Hatta, president of the company, said in his memorial address. “I’m truly sorry for failing to protect all of you.”

Kyoto Animation also uploaded a roughly 10-minute commemorative video of messages from the bereaved families, staff and others on its official YouTube channel on July 18.

“The wishes you have left still keep us moving forward,” said one message.

“Our emotions will never fade or go away with the passing of time,” Hatta, 71, said at a news conference held in the afternoon that day.

He said the box office revenue from the company’s first film released after the attack is helping its business.

“Trying to devote ourselves to our work has brought us together,” Hatta said.

But the date for the first hearing of his trial has yet to be decided, due to serious burns the suspect sustained in the attack and the large number of victims.