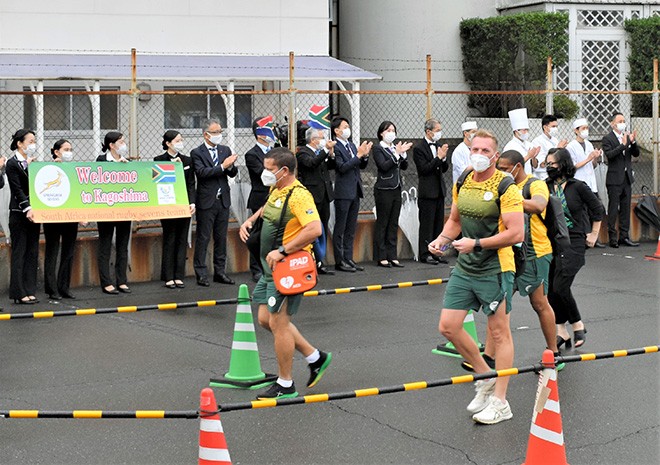 South African rugby players arrive at a hotel in Kagoshima on July 17. (The Asahi Shimbun)

The South African Sevens rugby side have turned to video conferencing in their bid to win a gold medal at the Olympic Games in Tokyo as Neil Powell takes on the role of virtual coach to lead the squad from his isolation room in Kagoshima.

Team South Africa have been hit by four infections, one in the Sevens rugby side and three within the soccer team competing at the Games.

Sevens head coach Powell has tested positive for COVID-19 and must isolate for 14 days, meaning he will not be on the sidelines when one of the pre-tournament favorites go for gold from July 26-28.

But he will continue to help the side he has coached since 2013 in their preparations this week, albeit through a computer screen, and will liaise with assistant coach Renfred Dazel on match-day.

"We came to Japan well-prepared, with the hard work done at home, so this is just a small distraction in that bigger picture," Dazel said in a media release from SA Rugby on Sunday.

"It is going well, the players adapted well to the situation, so credit to them."

The entire squad was placed in quarantine on arrival in Japan when they were identified as close contacts of an infected person on their flight from Doha to Tokyo. The group, bar Powell, have since been cleared.

That delayed the team's arrival at their base camp in Kagoshima from Wednesday to Saturday as they isolated in Tokyo, meaning they have missed some vital training days.

"We obviously need some time out on the field from a physical point of view, so we hope to stretch the legs a bit," Dazel said.

"We are all still in good spirits and understand that we can't change those things we can't control. We did manage to add some fun elements into the adjusted training schedule and that certainly helped."

South Africa won a bronze medal under Powell at the 2016 Olympics in Rio de Janeiro and they will be among the favorites again. They are in Group C with the United States, Kenya and Ireland.

The positive case is the latest announced by Team South Africa, including the first for athletes staying in the Village in Tokyo.

Two players and a team official from the country's soccer side competing at the Games have also tested positive.

Defender Thabiso Monyane and winger Kamohelo Mahlatsi, as well as video analyst Mario Masha, are in isolation as they prepare to face hosts Japan in their opener on Thursday.

Team South Africa’s Chief Medical Officer Dr Phatho Zondi said they were surprised at the infections, but he believes all protocols have been followed for the country’s athletes competing at the Games.

"Every member of Team South Africa required full medical clearance as an eligibility criteria," Zondi said in a statement.

"In addition, they were encouraged to isolate for two weeks pre-departure, monitor health daily, report any symptoms, and produce two negative nasopharyngeal PCR tests taken within 96 hours of departure, as per Tokyo 2020 requirements.

"The timing of the positive results suggests that the PCR test in these individuals was done during the incubation period of the infection, which is how they could be negative in South Africa and then positive in Japan.

"They are now in isolation where they will continue to be monitored and will not be allowed to train or have any physical contact with the rest of the squad(s)."