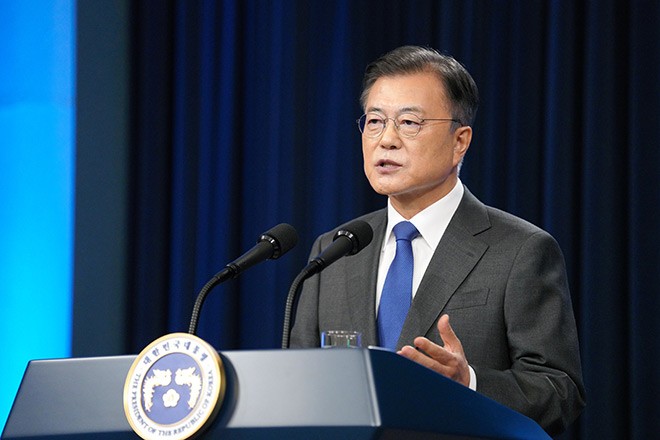 South Korean President Moon Jae-in speaks in Seoul in May. (Provided by The Dong-A Ilbo via The Asahi Shimbun)

SEOUL/TOKYO--South Korean President Moon Jae-in will not visit Tokyo for the upcoming Olympics, his office said on Monday, scrapping plans for what would have been his first summit with Prime Minister Yoshihide Suga.

"President Moon has decided not to visit Japan," Moon's press secretary Park Soo-hyun told a briefing. "As the Tokyo Olympics is a peaceful festival for all people around the world, we hope that Japan will host it safely and successfully."

The latest uproar further inflamed relations between the two nations feuding over territorial claims and their wartime history, dashing any remaining hopes that the Tokyo Games might offer a fresh start for bilateral and regional cooperation.

"The remarks were inappropriate as a diplomat, and we think it is very regrettable," Chief Cabinet Secretary Katsunobu Kato told a regular briefing.

Asked about a report about the diplomat's removal, Kato said it was a matter for the foreign minister and did not provide further details.

A summit between the two leaders had not been decided but if Moon decided to visit, Japan would accommodate him, Kato added.

"He also demanded the Japanese government to promptly take tangible and due steps to prevent a recurrence of such situation," the foreign ministry said in a statement.

Suga this month called relations between Japan and South Korea "very difficult," adding that it was up to Seoul to address the problems.

Moon had earlier hoped the Olympics may offer an opportunity for North and South Korea to improve relations and revive peace talks, before Pyongyang announced it would not take part because of coronavirus concerns.