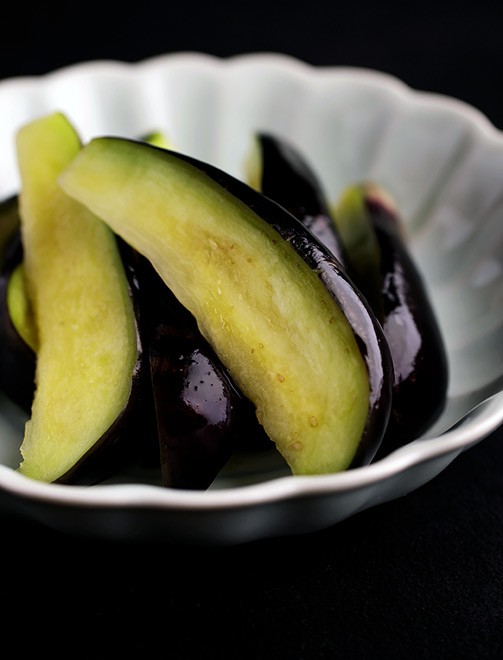 A variety of eggplants are produced around Japan. Other than the typical long egg-shaped kind, there are longer ones, bite-size ones and those with greenish-yellow skin, some of which you may see at the store. You can also order them directly from the production area.

How they are eaten depends on their shape and texture.

“Mizu-nasu,” literally “water eggplant,” is also a local variety, and those produced in the Senshu area in Osaka Prefecture are well known.

Although characterized by its large roundish egg shape, its foremost feature is the high water content. Tradition has it that “farmers would eat fresh mizu-nasu to hydrate themselves during field work.” Since the skin is soft and less astringent, it can be enjoyed lightly pickled or in a salad.

The marinade to lightly pickle the eggplant introduced this week is seasoned with salt, sugar and the “umami” of “konbu” kelp and tastes quite simple. The flavor sets out the succulent nature and texture of the mizu-nasu.

The arranged version also introduces a dish where the eggplant is eaten fresh. Called “dashi,” the dish only requires dressing chopped summer vegetables in seasonings. It is just right for the hot summer. Enjoy it with rice or on cool tofu.

The eggplant is said to be native to India. Ancient documents housed in the Shosoin Repository at Todaiji temple in Nara have accounts of the eggplant being presented to noblemen, and it is believed that the vegetable was already being produced in Japan during the Nara Period (710-784).

The extended history of cultivation has led to many local varieties, such as the very long “onaga-nasu” grown mainly in Kyushu, the long “naga-nasu” produced in the Tohoku region and west of the Kansai region, and the small “ko-nasu” whose well-known production areas are Yamagata and Kochi prefectures.

During Japan’s rapid economic growth period in the 1960s, nursery companies developed “Senryo” and “Senryo 2-go,” the long egg-shaped “chorankei-nasu” varieties soft in texture with deep-colored skin. Prolific and easy to grow, they spread throughout the country. Today, varieties with no spines have been developed as well.

About 25 kcal and 1.2 grams salt per portion

1. To make marinade, put water, salt and sugar in pot and mix. Add konbu and place on low heat. Turn off heat right before boiling, when konbu starts swaying, and cool (PHOTO A).

2. Cut off calyx from eggplant and cut into eight wedges lengthwise. Immerse in water right away.

3. Set plastic bag over bowl for stability and pour marinade. Drain eggplant on sieve, pat dry and add to marinade (PHOTO B). Push out air from bag, close top and place weight on top (PHOTO C).

4. Leave in this state for about half a day. It is done when eggplants turn soft and somewhat translucent. After this stage, store in fridge without weight. It will keep for about three days.

“Mizu-nasu,” a variety fit for eating raw due to its high water content, is lightly pickled in a marinade for about half a day. (Video by Masahiro Goda)

Midori Kasai is a professor at Ochanomizu University and former chairwoman of the Japan Society of Cookery Science.

“Dashi” made with eggplant (Serves two)

Dashi (homophone of “dashi” stock) is a local specialty of Yamagata Prefecture. Eggplants that you normally find at stores are used for this dish.

Cut off calyx from 1 eggplant and cut into dices 6 to 7 mm on a side. Toss in a bit of salt and when the pieces turn somewhat tender, squeeze out water. Cut 1 cucumber into dices 5 mm on a side. Peel and finely chop ginger about a quarter the size of a thumb.

In a plastic bag, add 2 Tbsp each of dashi stock and soy sauce, 2 tsp sweet mirin sake, 3-cm square dried konbu kelp and a pinch of salt, then eggplant, cucumber and ginger. Push out air and close bag. Weigh down using plate and leave for about 30 minutes.

Eggplants come in a wide variety, and you often see the long egg-shaped chorankei-nasu at the store. The cooking procedures change according to the hardness of the skin and texture of the flesh.

The roundish “bei-nasu” and “maru-nasu” are firm in texture and suited to be pan-fried, grilled or simmered, while the very long onaga-nasu with hard skin and soft flesh suits grilling. The small ko-nasu is often pickled, and the mizu-nasu with high water content is good when eaten fresh.