VOX POPULI: Time to fight heat with the weapons that work: beer and frozen treats 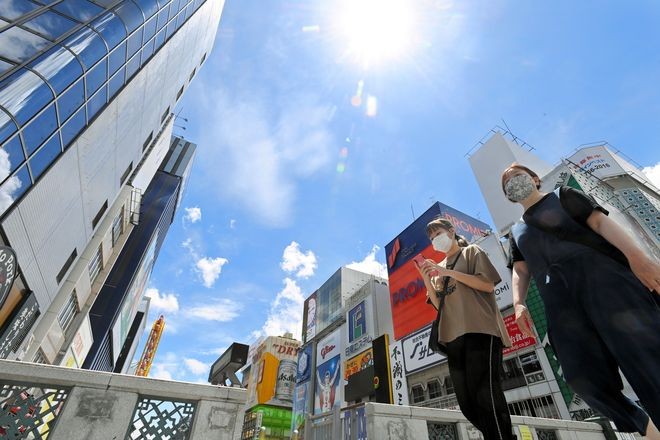 People walk under the scorching sun in Osaka's Minami district on July 17 when the "tsuyu" rainy season ended in the Kinki region. (The Asahi Shimbun)

Nothing could be more unoriginal than a TV beer commercial in which someone tips their glass and utters just one word: "Good." But hackneyed as it is, it definitely makes me crave a cold one.

The most tantalizing image I believe I've ever come across was a scene from Akira Kurosawa's 1949 noir film "Nora Inu" (Stray Dog).

"I remember there's some ration beer (at my place)," says a veteran detective, inviting his young colleague to his home.

They drink together. It's a summer day right after the end of World War II, and they'd just spent hours in the sweltering heat canvassing the neighborhood. Imagining their great thirst, I also thought about those postwar rationing days.

Memories of the welcome coldness of a drink or food, consumed on a hot day, last for a very long time.

I still vividly remember the glass of chilled "mugicha" (barley tea) I drank at my friend's home in my boyhood, dripping with sweat after play. And I will never forget the colorful ice pops that were handed out as rewards for participating in summertime "rajio taiso" radio gymnastic exercises.

A piece by haiku poet Fusei Tomiyasu (1885-1979) goes to the effect, "Soda water when life is full of joy." I wonder if this is about young people chatting in a teashop, or a child guzzling a soda pop from the bottle in a neighborhood "dagashiya" sweets shop.

According to a household budget survey conducted by the internal affairs ministry, last year's spending on frozen sweets marked a record high, topping 10,000 yen ($91.28) for the first time per household of two or more members.

Cooped up in their homes instead of working in aid-conditioned offices, people probably consumed more frozen treats than usual. And last summer was quite hot, of course.

On July 19, the "tsuyu" rainy season was declared over for the entire nation, with the Shikoku region bringing up the rear.

A haiku by Tomoko Furukawa goes to this effect: "It's beer for each person/ Whatever the task they just completed."

Whether it's a glass of ice-cold beer or a sweet frozen treat, we all deserve a reward for doing our best in the heat. And that season is here again.