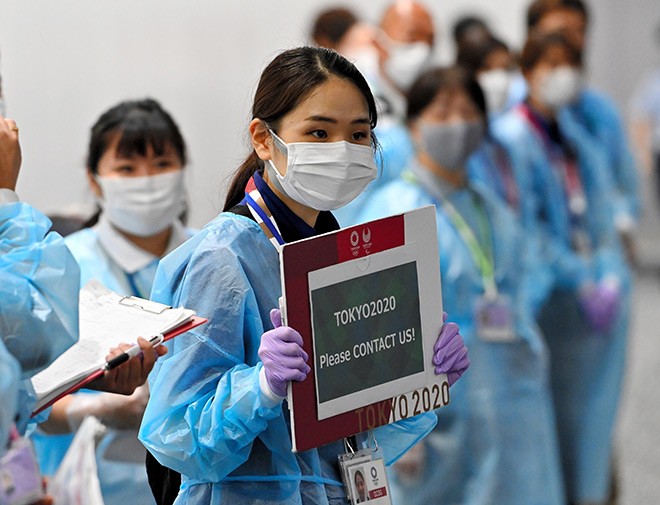 Officials at international airports are expressing frustration at the Tokyo Olympic organizing committee over the failure of its anti-coronavirus measures that has led to confusion, delays and anger at Japan’s ports of entry.

Foreign arrivals clearly connected to the Olympics have been sent back home because of insufficient documentation. And many who do arrive with the proper paperwork are allowed into the country even though they are obviously not among those needed to organize the Games.

The steady stream of overseas arrivals ahead of the July 23 Opening Ceremony has also created a hurdle for Japanese nationals seeking to return home from nations where COVID-19 cases are surging due to variant strains.

Under rules to control novel coronavirus infections in Japan, foreign travelers not connected with the Olympics are refused entry.

In mid-July, a delegation of athletes landed at Narita International Airport from South America. But one of the arrivals did not have the Olympic accreditation card needed to enter Japan.

An individual connected with an Olympic sponsor arrived from another nation with a son who was only a minor but held an accreditation card. They were let in.

“The Tokyo Olympic organizing committee said it would reduce the number of foreign arrivals, but individuals whom we doubt are deeply connected with the Olympics are arriving in droves,” a Narita Airport source said.

Sources said there have been several cases of people connected with the Olympics being refused entry because of improper documents.

A freelance journalist submitted a negative test certificate at an international airport, but officials there could not accept it because it lacked such details as when and where the test was conducted. In addition, the testing method listed on the document was not among those accepted by the Japanese government.

The journalist protested but was deported.

Others said many Olympic-related arrivals had clearly not read the organizers’ so-called playbook that lays out the rules for the time they are in Japan.

One rule is that all arrivals download OCHA, a special tracking app, onto their smartphones.

One airport source said: “Close to half of the arrivals connected with the Olympics have not downloaded it. Some appear not to have read the playbook at all.”

For example, an Olympic delegation of dozens of athletes from a country in the Middle East recently arrived in Japan. Only three of them had downloaded the app.

Those without the app are asked at airports to install it, but that has led to further delays and confusion.

The situation has hurt government efforts to bring back Japanese nationals from nations such as Indonesia where the Delta variant has caused a spike of COVID-19 cases.

The government has secured about 2,000 hotel rooms in the greater Tokyo metropolitan area for the self-isolation of Japanese nationals arriving at Narita.

There are now concerns about a hotel room shortage because more Japanese studying abroad are expected to return home for their summer break.

A government source said 500 hotel rooms that had been secured for returning Japanese have been turned over to those related to the Olympics in response to a request from the organizing committee.

The shortage of hotel rooms has led the government to move arriving Japanese nationals to Chubu Airport in Aichi Prefecture for self-isolation there.