Homeless people told they have no place in Tokyo Olympics 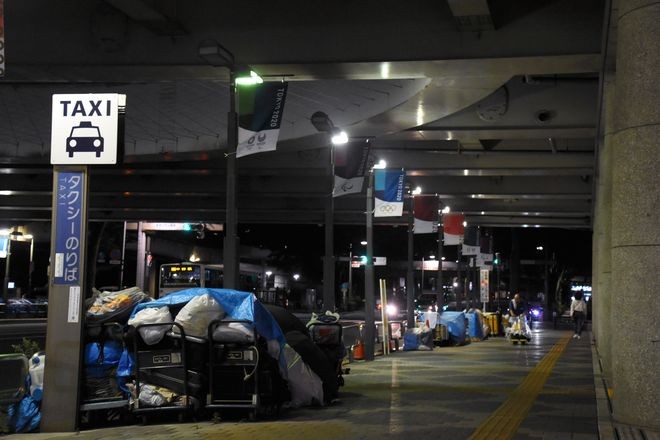 Homeless people stay in encampments under banners for the Tokyo Olympics on July 15 in the capital’s Shinjuku Ward. (Takaaki Fujino)

Hundreds of people in central Tokyo have been given eviction notices even though they have no permanent addresses and nowhere to go.

Metropolitan government officials have entered the final phase of clearing the area of homeless people before the Opening Ceremony for the Tokyo Olympic Games on July 23.

A 62-year-old man who has lived on the streets for a month near the Tokyo metropolitan government’s building in Shinjuku Ward said an apparent government official approached him on July 8 to deliver a note.

“Remove (your belongings) by July 21 because they are creating obstacles for road management,” the note said.

When asked why that date was the deadline, the note-giver said, “Because there is an Olympic-related event.”

An event welcoming the arrival of the Olympic torch is scheduled at the government’s building on July 23, hours before the Opening Ceremony.

The note not only increased the dejection of the homeless man, but it also deflated his once-elevated Olympic spirit.

He moved to Tokyo around the age of 10 and played soccer at junior and senior high schools.

After graduating from high school, he worked as a truck driver and traveled around the country.

In 2016, he was watching the Closing Ceremony of the Rio de Janeiro Olympics on TV at his apartment when then Prime Minister Shinzo Abe emerged in the spotlight as Super Mario.

The performance made his heart sing. “Tokyo is next!”

But about two years ago, he quit his job because of relationship problems. He soon used up all of his savings and ended up living on the streets.

Finding employment has been difficult for him, and he has depended on support groups for food.

Now the once-shiny Olympics pose an existential crisis for him.

“Where should I go?” he asked.

Blue tarps and cardboard houses in the area surrounding the metropolitan government’s building are ubiquitous reminders that many people have been left out of the wealth in the bustling capital.

Elderly men, women and young people lie down or sit cross-legged on the dusty streets.

Banners promoting the Olympics flap in the wind above them. Sometimes, a vehicle adorned with a “Tokyo 2020” logo passes by.

Signs have now appeared ordering them to remove their belongings (and themselves) from the area by July 21.

A homeless man in his 30s who applied for public assistance earlier this month found a place to stay.

A local official made arrangements for the man to stay at a business hotel in case of an emergency.

But one condition was attached: He must check out on July 22.

The hotel was securing rooms for the Olympics and would not let him stay any longer, he was told.

However, he received a “reprieve” after the Games’ organizers decided to ban spectators at the Olympics.

Although he still has a place to stay, the ordeal left him somewhat bitter.

“Without a job, I’m in a vulnerable position,” he said. “I couldn’t even complain when they said, ‘This is for the Olympics.’”

According to Tsukuroi Tokyo Fund, a Tokyo-based support group, authorities have taken tougher approaches against homeless people since 2013, when Tokyo was named the host city of 2020 Olympic Games.

Parks were locked and lit up at night to discourage homeless people from sleeping there.

There were 1,126 homeless people living in parks, on river sides and at station buildings in Tokyo in January 2019, according to a metropolitan government survey.

The number was 862 according to a survey conducted in January this year.

The whereabouts of the 264 people no longer on the list are unknown.

(This article was written by Takaaki Fujino and Takashi Endo.)