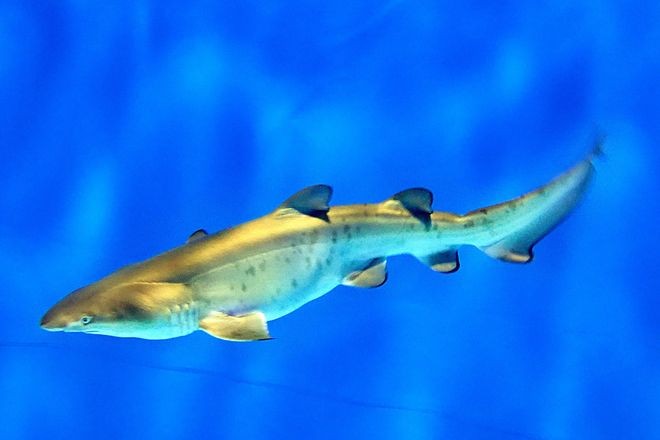 The first sand tiger shark born in captivity in Japan is seen on June 17. (Provided by the Aqua World Ibaraki Prefectural Oarai Aquarium)

Only four other aquariums, all located overseas, have accomplished the feat.

In February, a keeper spotted fetal movement in the swollen abdomen of a female sand tiger shark at Aqua World, showing that she was pregnant.

Aquarium staff in March began watching over the shark almost around the clock every day.

The birth brought tears to the eyes of at least one worker at Aqua World.

“My hands trembled with excitement and emotion as they held a camera to record the event,” said Kotaro Tokunaga, a 43-year-old keeper.

The baby female was 90 centimeters long and weighed 4.3 kilograms immediately after birth.

She appears to be in good shape, as she lithely swishes her tail fin during her swims, Tokunaga said.

Since opening in 2002, Aqua World has been trying to breed the sand tiger shark, a viviparous species whose eggs hatch inside the womb.

The keepers found the rutting season for the male shark that was brought from South Africa was autumn while the estrus period was spring for the female kept at the aquarium.

They adjusted water temperatures and daylight hours to bring the season for the male shark closer to that of the female, officials said.

In 2015, a sand tiger shark at Aqua World became the first of its species to become pregnant in captivity in Japan. The pregnancy, however, ended in a stillbirth.

The newborn is currently off-limits to the public. Plans for public viewing will depend on the baby’s physical conditions, the officials said.