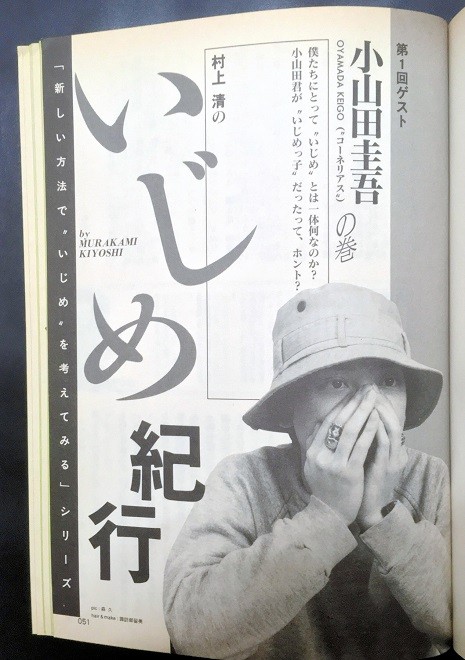 A page of a 1995 magazine article in which Keigo Oyamada described how he bullied his fellow classmates and people with disabilities during his school days. (Provided by a publishing industry source)

A conductor who was supposed to be directing a performance of Beethoven's "Pastoral" emerged from the wings onto the stage with a fierce scowl.

The moment he raised his baton, a member of the orchestra shouted, "No, Maestro, that's not it!"

The conductor was apparently going to do Beethoven's Symphony No. 5 by mistake, according to an anecdote in "Ongakutte Nandarou?" (What is music?) by composer Shinichiro Ikebe.

His demeanor and movements were so unexpected that anyone could have seen something was not right, Ikebe explained.

Oyamada, former composer for the Opening Ceremony of the Tokyo Olympics, had brutally tormented his classmates and people with disabilities as a schoolboy.

He bragged about this in a magazine interview in his 20s, and this has come back to bite him.

He obviously felt no qualms about agreeing to take on the Olympic and Paralympic projects, which is disgusting in itself. And the organizing committee apparently never thought to check into his past, either.

But more seriously, the committee continued to justify his appointment, even after his grievous conduct became public knowledge. It held out until, in the latest turn of events, Oyamada resigned on July 19, and the committee decided to remove his musical piece from the Opening Ceremony program.

The chief of the committee explained that, given the imminence of the opening day, he thought it will be all right to let Oyamada continue. "But we made a poor judgment," he admitted.

He may have thought privately that he erred by underestimating public opinion. But the committee's collective misstep was in demeaning the Olympic spirit itself.

They have not learned a thing from the mistakes made by Yoshiro Mori, the former head of the committee, who was forced to resign for his sexist gaffes.

Oyamada is said to have composed a four-minute opening piece for the ceremony.

Instead of replacing it with something else, I suggest that the committee might as well keep the first four minutes silent as an expression of its remorse and apology.