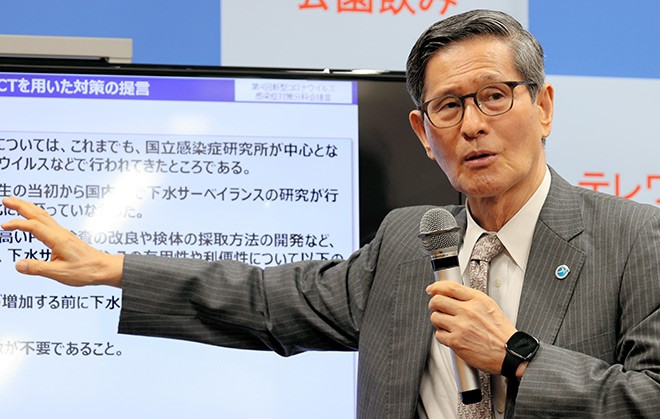 Shigeru Omi, chief of the government’s COVID-19 task force, speaks at a news conference in Tokyo on July 16. (Shiro Nishihata)

Tokyo will likely see a single-day record of nearly 3,000 new COVID-19 cases in early August, putting an enormous strain on the medical system, the chief of the government’s anti-virus task force said.

“It is possible that new cases will double in two weeks’ time, topping the peak of the third infection wave that occurred around the New Year holidays,” Shigeru Omi said on a Nippon Television Network news program on July 20.

On that day, the number of newly confirmed novel coronavirus infections was 1,387 in the capital.

The program host asked Omi, “Will the number of new cases reach nearly 3,000 in the first week of August?”

“It very well could,” Omi answered.

Omi noted that an increasing number of people have been vaccinated since then, but “more people are now being hospitalized in Tokyo.”

“If infections spread at the current speed, it is extremely likely that medical facilities will be strained again,” he added.

Tokyo is currently under a COVID-19 state of emergency, but the public appears more lackadaisical in guarding against infections, while thousands of people from overseas are arriving in Japan for the Tokyo Olympics and Paralympics, which end in early September.

Omi called on the public to cooperate with anti-virus measures.