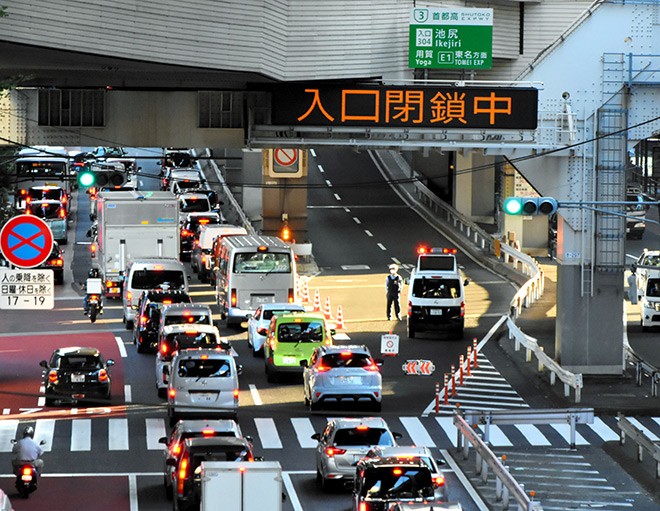 Cars are backed up on National Route 246 in Tokyo’s Setagaya Ward on July 19. (Ryo Oyama)

After traffic restrictions and hiked highway tolls for the Tokyo Olympics took effect and gridlocked streets across the capital, furious drivers stuck sitting idle for hours took to social media to vent their outrage.

“Gaikan is backed up and it’s so irritating,” one driver tweeted after 7 a.m., referring to the Tokyo Gaikan Expressway, which runs through Saitama Prefecture and connects to Tokyo’s outer wards.

It was just one in a barrage of tens of thousands of tweets by other frustrated drivers, with many using the hashtag “#truckdriver,” while others used, “#DoNotHoldOlympicsInJapanEver!”

The new road restrictions kicked in early in the morning on July 19.

Tolls for the Metropolitan Expressway, the main artery that runs through Tokyo and connects the capital with other expressways, increase by 1,000 yen ($9) throughout the day, dropping by half after midnight.

But as soon as the new pricing scheme kicked in, drivers opted for city streets to avoid paying extra.

There are usually about 10,000 tweets and retweets published in a normal day that include a word for “traffic jam.”

But the number of such tweets jumped that day, peaking at noon.

Many of these tweets also included words such as “metropolitan,” “toll increase” and “local (street).”

Many drivers observed that Loop 7 as well as national routes 20 and 246 were clogged way more than usual.

One Twitter user heard on the radio that a delivery truck driver could not take their lunch break because of the traffic and commented about it on the social network site. It was retweeted many times.

The traffic restrictions for the Olympics have also disrupted postal and package deliveries.

From July 19 to July 20, 11,000 tweets and retweets mentioned “delay,” excluding the ones that referenced trains or accidents.

According to an estimate made by Brandwatch, about 240,000 people saw a tweet that said, “It looks like mail and package deliveries are delayed, too. Do they need to hold the Olympics even at the risk of destroying the economy?”