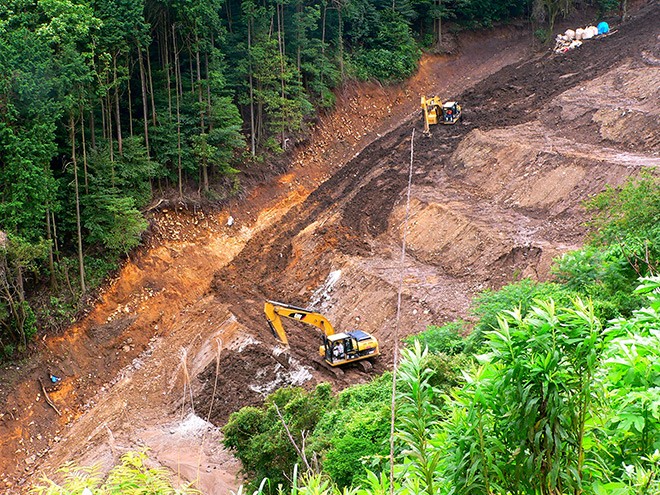 This photo taken on July 8, 2010, shows the landfill that is believed to have triggered a deadly landslide in Atami, Shizuoka Prefecture, on July 3. (Provided by a reader)

The Atami city government knew that a landfill high up in the mountains of the seaside city was larger than legally permitted for about a decade, according to a former municipal official.

The landfill is believed to have triggered a deadly landslide on July 3 that claimed 19 lives and left another nine people missing.

In an interview with The Asahi Shimbun, a former high-ranking official in the city’s civil engineering section acknowledged that when the landfill work was completed around August 2010, its size already exceeded standards set by a Shizuoka prefectural ordinance.

The current official position of the Shizuoka prefectural government is that while the landfill had exceeded the legal standards, an investigation is continuing into whether local government officials were aware of the violation before the massive landslide occurred.

The former official said he visited the landfill site several times after the work finished. City government officials asked the property owner to remove dirt and sand because of the excessive volume, but the owner claimed to not have the funds to do so.

The site was sold to the current owner in February 2011.

In response to Asahi questions, the Atami city government on July 19 admitted that city officials visited the site in August 2010 along with Shizuoka prefectural government officials.

But one Atami official said the city has yet to dig up any official records stating whether the city determined the landfill exceeded the legal standards.

“The city government has not yet found documents or other materials that demonstrate such an understanding of the situation,” the official said.

A search for related documents and an investigation into the degree of danger posed by the landfill are still under way, the Atami official said.

Shizuoka Vice Governor Takashi Namba said three inter-related factors led to the landslide: natural conditions, the creation of an improperly sized landfill, and the inability of local authorities to discover that it broke the rules.

Namba added that a review of administrative procedures was needed to determine if any responsibility lay with a local government.

According to Shizuoka prefectural officials, the landfill was found to be about 50 meters high in places--more than three times the 15-meter standard set to ensure that landfills do not trigger landslides.

The amount of dirt and sand used in the landfill likely also exceeded the report submitted with the prefectural government.