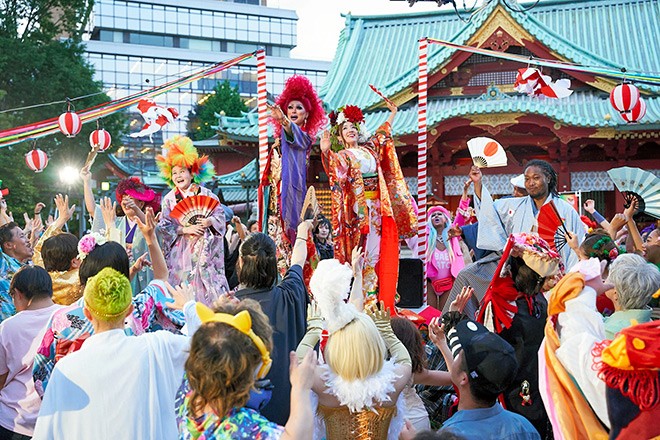 Staff film a scene for ONE, a Tokyo Olympics cultural event that will no longer feature author Nobumi (Provided by the Tokyo Organizing Committee of the Olympic and Paralympic Games)

A children’s book author has bowed out of the official cultural program of the Tokyo Olympics following an online uproar over his past offensive remarks, including insensitive views about kids with congenital disorders.

“Mr. Nobumi has declined to take part in the event on his own will,” the Tokyo 2020 Nippon Festival said on its official website on July 20.

The festival involves a series of cultural programs and events to promote the Summer Games as a symbol of global peace and human solidarity. It is hosted by the Tokyo Organizing Committee of the Olympic and Paralympic Games.

Nobumi was scheduled to take part in an online event called ONE in August that is billed as a way to “realize an inclusive society” through dance and musical performances.

He is the latest Japanese figure to resign from the Olympic festivities over inappropriate remarks and behavior.

Musician Keigo Oyamada resigned on July 19 as a composer for the Opening Ceremony in connection with his past boasts about abusing classmates and disabled children.

The organizing committee’s announcement of Oyamada’s appointment as an Olympics composer immediately sparked criticism on social media about his suitability for that role.

The Oyamada debacle also led many on social media to raise another question, “What about Nobumi?”

Many pointed out that Nobumi, in books and on social media, has written about his past abusive behavior toward a female teacher and also disparaged children with congenital disorders.

In 2018, a song lyric that Nobumi wrote infuriated mothers because it normalized and glorified women who make self-sacrifices to raise children. Nobumi issued an apology for that lyric.

A representative of the Tokyo 2020 committee said the organizer “learned about (Nobumi’s negative reputation) through news reports.”

“Then we asked him about it, and he resigned,” the representative said. “He said that the way things stand, he cannot continue serving in that role.”

The committee also said it was unaware of Oyamada’s previous comments about his abusive behavior that were made in the 1990s.

Nobumi made his debut as a children’s books author in 1999. He was also in charge of illustrations for a Cabinet Office project that started in fiscal 2015 to offer support for children and parenting.