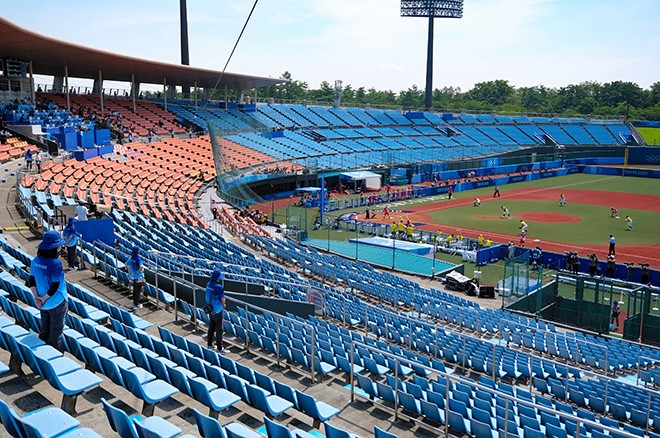 The opening softball game of the Tokyo Olympics was held July 21 with no fans in the stands. (Taku Hosokawa)

FUKUSHIMA--When Yukiko Ueno, the ace of the Japanese women’s softball team, threw the first pitch in the game against Australia on July 21 to open the Tokyo Olympics, no cheers rose from the stands.

Fukushima prefectural officials had decided events in the prefecture would be staged without spectators.

The Fukushima Azuma Baseball Stadium was chosen as the site for the first game of the Tokyo Olympics to symbolize that the Games were about the rebuilding of the Tohoku region following the Great East Japan Earthquake and tsunami of 2011.

However, the 14,000 or so orange and blue seats were empty as Japan went on to rout Australia 8-1 in five innings under the mercy rule.

Temperatures in Fukushima city exceeded 30 degrees about an hour after the softball game began at 9:01 a.m.

A fence was installed around the stadium so local residents could not even approach the back of the stands to get a glimpse of the competition.

“A different world has been created beyond the wall," said Jun Koda, 53, who owns a nearby cafe. "This being the case, it would not have mattered where the game was held.”

He decided to close his cafe on July 21 because of the traffic restrictions in effect in the vicinity of the stadium on game days.

Takahiro Sato, 56, a teacher who lives nearby, said, “It is too bad there are no spectators because I was looking forward to this.”

Local residents had helped cut the grass around the stadium before the first game.

“They could at least have allowed us to wave flags to welcome the athletes,” Sato said as he left for work.

(This article was written by Tetsuya Kasai and Kenichi Araumi.)