Chilean 1st to withdraw from Olympics over COVID-19 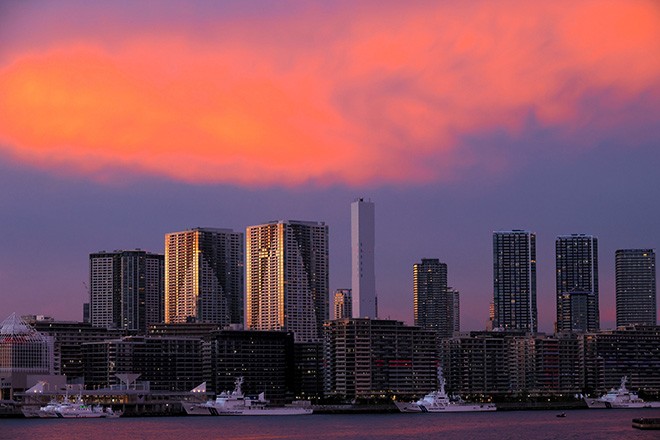 The sky is red at sunset over the Olympic Village in Tokyo’s Harumi district in Chuo Ward on July 20. (Tatsuya Shimada)

The Chilean Olympic Committee announced on July 21 that a taekwondo competitor tested positive for the novel coronavirus and will withdraw from the Tokyo Games.

Fernanda Aguirre, who had entered the taekwondo 57-kilogram weight division, is the first athlete to withdraw from a competition at the Tokyo Olympics because of COVID-19.

She had arrived in Japan from Uzbekistan and took a polymerase chain reaction (PCR) test and other tests at the airport. The result came back positive.

Aguirre did not travel with the team to the Olympic Village. She has been isolated at a designated facility, officials said.

Aguirre does not have any symptoms but will withdraw from the competition scheduled on July 25.

The Tokyo Organizing Committee of the Olympic and Paralympic Games announced the same day that eight people accredited for the Tokyo Olympics have newly tested positive for COVID-19, including Aguirre.

Among the eight new cases is a person staying in the Olympic Village who is involved with the Czech beach volleyball team.

A Czech beach volleyball player tested positive for the virus on July 20, and the committee said that 12 people have been identified as close contacts.

Seventy-five people have tested positive since July 1, according to the committee.

In Hiroshima Prefecture, Miyoshi city officials said the training camp for the Mexican baseball team will be canceled because a player has tested positive.

The city was expected to host the camp from July 23 to 27.

But a player contracted the virus before traveling to Japan, officials said.

The remaining 32 players and staff on the team tested negative for the virus. They are on their way to Japan, scheduled to arrive on July 23, and will travel directly to the Olympic Village in Tokyo.

The city was notified about the itinerary change by the team on the evening of July 20.