Chinese car makers gearing up to compete in Japanese market 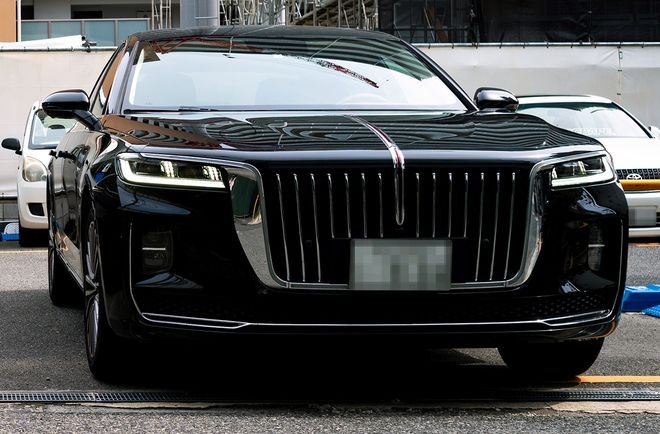 On a recent day, two black cars were parked close to each other at a pay parking lot in a traditional district in Osaka, from which the iconic Tsutenkaku Tower can be seen between buildings.

The vehicles boasted an unusual design that can rarely be found in Japan but turn heads on roads in China.

They are the Hongqi H9 sedan, released by major Chinese state-owned automaker China FAW Group Corp. As Hongqi was introduced to cater especially to national political leaders in China, the model has a far higher brand appeal than other luxury vehicles there.

Ranging in price from 5.8 million yen ($52,800) to 9.8 million yen before tax, Hongqi is available in two versions: a gas-powered one and the hybrid model.

Hideki Katsu, 39, a businessman in Osaka, said he bought an Hongqi H9.

“China lagged behind in automobile production technology,” said Katsu. “It is great that the day has come when I can drive a (Chinese-made) one in Japan, a leading car manufacturer in the world.”

Chinese automakers are increasingly gearing up for making inroads in the apparently unconquerable Japanese market.

As home appliances and other articles made in China for daily use have greatly spread in Japan over the last 30 years, automobiles--occasionally called the “king” in the manufacturing industry--show signs of expanding their sales as well.

The point is how far Chinese-produced vehicles can win over customers in the market, 90 percent of which is dominated by domestic manufacturers.

According to an import agency, a total of 10 Hongqi automobiles had arrived in Japan by the end of June. An electric sports utility model is also expected to be imported in September.

Most of their purchasers are Chinese residents in Japan and people of Chinese origin who have obtained Japanese nationalities.

A Hongqi can automatically detect speed limit signs along roads to show the velocity limit on the dashboard display. When the car travels faster than the limit, a warning is issued. An alarm is sounded if there are not only obstacles in the road ahead but also the risk of a rear-end collision.

Importing vehicles made in China by domestic dealers to Japan is said to be extremely difficult because they must meet the nation’s tough standards. FAW Group fully backed the importing agent to overcome the challenge.

“The import this time was done in the form of parallel importing but virtually represents the official sales by FAW Group,” said the agency’s official.

The Techno-Frontier 2021 fair was held through June 25 in Tokyo’s Odaiba district. There, the HongGuang Mini EV electric model from China, priced at around 450,000 yen, was on display as well.

According to the Japan Automobile Dealers Association, domestic automobiles accounted for 89 percent of the Japan’s total car sales in 2020, meaning the market is a stronghold for Japanese brands.

The Finance Ministry’s trade statistics show electric automobiles’ imports from China rose dramatically from February 2021. Though 792 units were imported in 2020, the sales reached 2,108 between January and May 2021.

This is apparently due to the production transfer of U.S. EV maker Tesla Inc.’s mainstay sedan Model 3 from the United States to Shanghai. When the manufacturing started at a Chinese plant, prices of the Model 3 were slashed by up to as much as 1.6 million yen in February.

Will Chinese brands’ automobiles really be able to crack open the Japanese market? Tomoyuki Suzuki, an official at research firm AlixPartners LLP, said that is possible.

“They (Chinese automakers) will need to build a dealers’ network first of all,” said Suzuki. “It is likely that they will team with struggling small Japanese automakers so they can take advantage of their local dealer networks.”

Once a sufficient sales network is established, 660cc minivehicles might be replaced by low-price Chinese-produced cars first, said Suzuki.

“Japan’s average income is on the decline, rendering it increasingly difficult for a certain group of people to buy cars,” Suzuki pointed out, referring to the likelihood of Chinese products being accepted by Japanese drivers.

China’s brands have already been gaining a foothold in the Japanese market with products developed for commercial purposes.

BYD Co., a major Chinese EV maker, had delivered 53 EV buses to 17 businesses and local governments in Japan through the end of May. While seven of them were to be used on regular bus routes in Kyoto, 12 were imported for shuttle service for large cruise liner passengers in Naha.

A public relations representative of BYD Japan Co. explains the advantage of BYD products: “EV buses can be used as rest spaces equipped with air cooling and heating systems in times of disasters. They can also supply power to evacuation shelters, contributing to local communities.”

Automakers in Japan, the United States and Europe have expertise in gas engines since their production entails accumulated techniques.

In the meantime, the Chinese government has been providing subsidies and other means to support the manufacturing of EVs powered by electric motors, so that Beijing could lead the technological advancement in the field.

Technical learning through cooperation with Japanese, U.S. and European corporations are likewise behind the Chinese automakers’ increased competitiveness. But the Chinese government’s policy to strongly back EV firms played an even more important part.