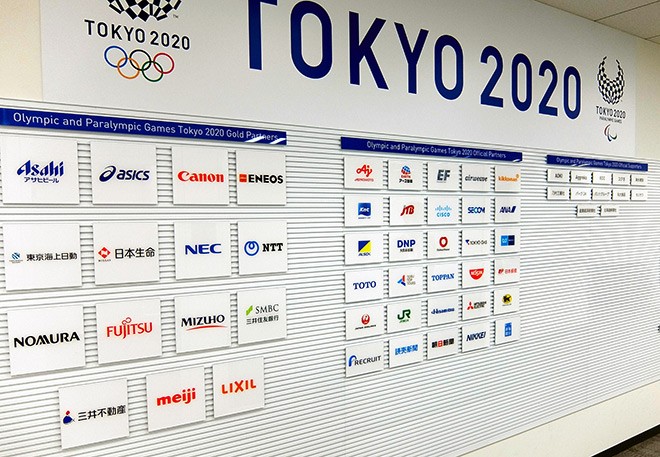 The names of domestic sponsors for the Tokyo Olympics and Paralympics are seen at the organizing committee’s office in the capital in February 2019. (Asahi Shimbun file photo)

Many big names in Japan Inc., including official sponsors of the Tokyo Olympics, will not send their top officials to the Opening Ceremony on July 23.

The companies cited the no-attendance policy at most of the Games’ venues and the need to prevent their executives from contracting the novel coronavirus.

But some company officials said they fear a possible backlash from the public because polls show a majority of voters oppose holding the Summer Games during the COVID-19 pandemic.

“I was asked to attend, but I won’t,” Masakazu Tokura, who heads the country’s most powerful business lobby, Keidanren (Japan Business Federation), said at a news conference on July 20. “I would like to enjoy the Olympics at home with my family as an ordinary citizen.”

He added that Keidanren informed the Olympic organizers of the decision on July 16.

Kengo Sakurada, chairman of Keizai Doyukai (Japan Association of Corporate Executives), and Akio Mimura, who heads the Japan Chamber of Commerce and Industry, will also be no-shows at the ceremony.

Among official sponsors, Panasonic Corp. and Procter & Gamble Co. said on July 20 that they will not send their executives to the Opening Ceremony.

Toyota Motor Corp. the previous day said its president, Akio Toyoda, and other officials will skip the event.

But Kazuhiro Tsuga, chairman of Panasonic, will take part in the Opening Ceremony as a vice chair of the Olympic organizing committee.

Among other sponsors, Fujio Mitarai, chairman and president of Canon Inc., will attend the ceremony as honorary chair of the organizing committee, while NEC Corp. and Fujitsu Ltd. decided not to send their top officials to the event.

Officials of Toto Ltd., Recruit Holdings Co., Nippon Telegraph and Telephone Corp. and Nomura Holdings Inc. are also planning to give the Opening Ceremony a miss.

An official of one of the sponsors said the company took into account that many people want the Tokyo Games postponed again or canceled to prevent the novel coronavirus from spreading.

“We don’t want our officials to attract unwanted attention by attending the ceremony with no fans in the stands,” the official said.

However, sponsors are divided over whether to run Olympic-related TV commercials.

Toyota announced it will not broadcast such ads in Japan, but many other sponsors said they will run commercials as planned. Some of them have already been aired.

In an ad that Asahi Breweries Ltd. began broadcasting on July 10, people holding cans or glasses of beer cheer as they watch athletes on TV or computer instead of seeing them live at the competition venues.

(This article was written by Takeho Morita and Hiroaki Kimura.)