VOX POPULI: Humans haven’t learned how to associate with the ‘living ocean’ 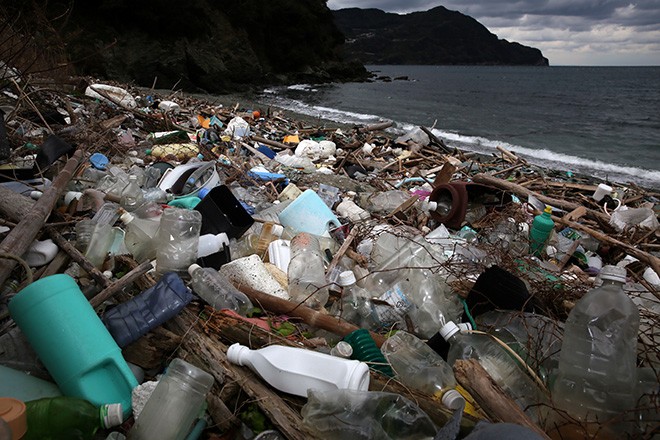 A beach filled with plastic waste and other debris in Ikata, Ehime Prefecture, in 2019 (Asahi Shimbun file photo)

“First contact,” a popular theme in science fiction about the encounter between humans and sentient extraterrestrial life, is presented on a grand scale in the 1961 novel “Solaris” by Polish writer Stanislaw Lem (1921-2006).

The eponymous planet larger than Earth is encapsulated by an ocean of gel, which is itself a life form.

When a human researcher in space suit puts his hand out, an ocean wave hesitantly tries to clasp the proffered hand.

The ocean appears to be sentient as well as intelligent, and researchers attempt to establish communication by sinking an electronic device and sending X-ray signals.

July 22 is Umi no Hi (Marine Day), a national holiday in Japan.

Covering 70 percent of Earth, the ocean has nurtured life since time immemorial.

I am sometimes tempted to anthropomorphize the ocean, and I felt that way when I learned that the ocean absorbs carbon dioxide and helps curb global warming to a certain degree.

According to the National Institute for Environmental Studies, about 20 to 30 percent of annual carbon dioxide emissions from human activities are absorbed into the ocean, with seaweed partially aiding the process.

But the institute warns that if global warming raises the seawater temperature, the ocean’s capacity to absorb carbon dioxide emissions may decline.

This means there are limits even to the ocean’s seemingly infinite “tolerance.”

Plastics that end up in the ocean have broken down into minute particles, which accumulate in the bodies of fish and other marine creatures.

Despite a drive to reduce single-use plastic bags and other items, the progress made so far apparently represents nothing more than a baby step.

How do we better associate with the “living ocean” that defies human understanding?

The question is not limited to a fictional faraway planet.