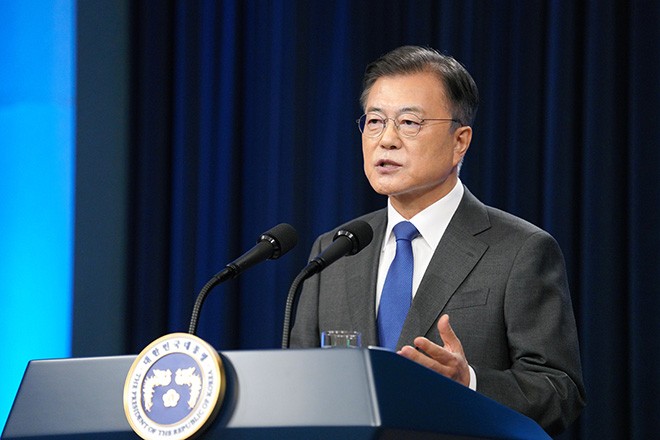 South Korean President Moon Jae-in speaks in Seoul in May. (Provided by The Dong-A Ilbo)

South Korea dropped plans for President Moon Jae-in to visit Japan for the Opening Ceremony for the Tokyo Olympics on July 23.

The two countries failed to agree on some issues in preliminary talks for Moon’s meeting with Prime Minister Yoshihide Suga during his planned visit to Japan.

Under the bleak state of the bilateral relationship, even a basic diplomatic exchange of goodwill--the leader of one country visiting a neighbor for the opening of a global event to reaffirm friendly ties--cannot be realized.

Both governments speak about a “future-oriented” bilateral relationship. This vision can become a reality only if political leaders responsible for bilateral ties achieve a breakthrough.

Suga and Moon must not spare any effort to normalize the relationship between their countries as soon as possible.

Tokyo and Seoul long ago agreed to schedule Moon’s two-day visit to Japan, but subsequent talks failed to produce results that would meet South Korea’s expectations for the first summit between Moon and Suga. As a result, the South Korean government decided to abandon the plans.

South Korea demanded that Japan remove measures to tighten controls over Japanese exports of certain technologies to the country introduced in 2019 in exchange for action concerning a bilateral agreement on exchanges and protection of military information.

Japan dismissed the proposal, saying history issues must be settled first, according to sources.

Moon has been calling for improvement in the bilateral relationship since the beginning of this year.

He signaled his desire to hold talks with Suga on this occasion after he tried to do so during the Group of Seven summit held in Britain in June, to which he was invited.

With less than 10 months before his five-year term ends, Moon appears to be feeling the pressure to fix bilateral relations to avoid leaving a “negative legacy.”

But specific actions are necessary to break the impasse over fundamental issues.

As chief of the administration, Moon should make a political decision to deal with the court rulings over wartime Korean laborers and “comfort women,” which lie as the largest stumbling blocks.

Meanwhile, it is disappointing to see Suga showing no signs of a willingness to tackle challenges concerning policy toward the Korean Peninsula, not just Japan’s relations with South Korea.

Despite certain bilateral issues with South Korea, Suga, as Japan’s leader, has a duty to capitalize on an opportunity to hold talks with his South Korean counterpart to grasp the regional situation and adjust his foreign policy agenda. But Suga has not shown any recognition of this important duty.

A senior diplomat at the Japanese Embassy in Seoul recently made an obscene remark that apparently ridiculed South Korea.

While the diplomat should be criticized for his outrageous remark, Suga and other politicians appear to be fostering a sentiment among bureaucrats that is not conducive to improved bilateral ties.

A senior official at the South Korean presidential office said the talks between the two countries over Moon’s proposed visit to Japan had led to “closer understanding” on history-related issues.

If that is the case, this opportunity should be utilized to continue dialogue on various levels, including foreign ministers, to overcome the problems.

On July 21, the No. 2 foreign policy officials of Japan, the United States and South Korea held a meeting in Tokyo, the first trilateral talks of this kind in four years.

They discussed issues concerning how to deal with North Korea and China and the situation in the Taiwan Strait, according to sources.

Japan and South Korea have a common interest in working together on many urgent issues in East Asia. The leaders of the two countries should end futile confrontations by taking a broad perspective.