Painting from doomed Japanese warship on display in Kyoto 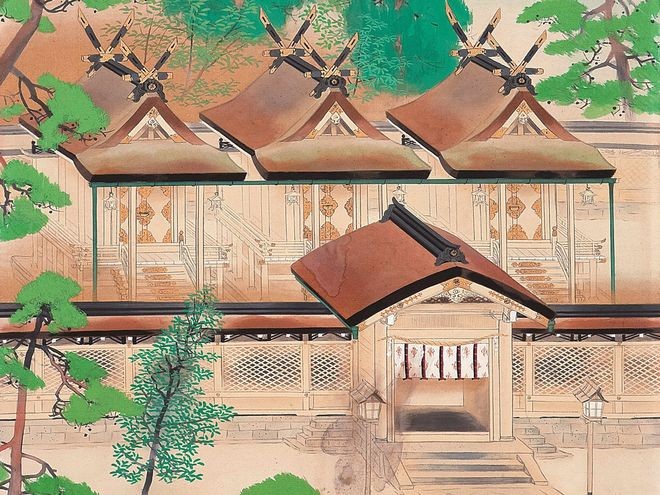 KYOTO--A painting destined for the captain's cabin aboard Japan's mighty World War II battleship "Yamato," but removed before the warship's final doomed mission, is now on display at a museum here.

"The Guardian Deity of the Battleship Yamato" was painted by Japanese-style painter Insho Domoto.

Yamato was sunk during the closing days of the Pacific War in 1945 while making a sortie to Okinawa Prefecture on a suicide mission.

The painting depicts the main temple building of Oyamato Jinja shrine in Nara Prefecture, which, according to the shrine's website, has housed a deity associated with divine protection for overseas travelers since ancient times.

While the battleship was being built in utmost secrecy, the Imperial Japanese Navy instructed Nara prefectural authorities to create the painting so that the shrine's spirit could be dedicated in the warship.

It is said that Domoto had no knowledge of the true intention behind the request when he as asked by the prefectural government to produce the painting.

"The Guardian Deity" was removed from the battleship just before it was dispatched on the mission, along with other items that could catch fire in the heat of battle.

According to the shrine's head priest, a Navy representative wrapped the painting in purple "fukusa" cloth and came to "take out the soul."

To prevent it from being requisitioned by the Allied Occupation Forces, "The Guardian Deity" was temporarily hidden in a hospital. It was later ended up in the possession of the Japan Maritime Self-Defense Force's Naval History Museum.

A backboard with writing that reads, "Captain's cabin of the warship Yamato" remains missing, however.

The painting will remain on display until Sept. 26 at the Kyoto Prefectural Insho-Domoto Museum of Fine Arts in the city's Kita Ward as part of a special exhibition titled "Domoto Insho: Commemorating the 130th Anniversary of His Birth."

For more information, visit the official website at (https://insho-domoto.com/plan/new/current/index-e.html).