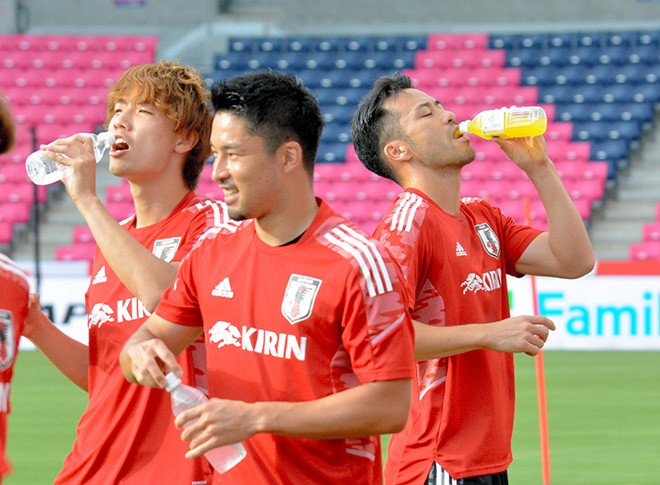 Maya Yoshida, right, and other members of the Japanese men’s soccer squad for the Tokyo Olympics keep themselves hydrated during a practice session in Osaka on July 11. (Soshi Katsumi)

Just as feared, temperatures are expected to exceed 30 degrees during most of the Tokyo Olympics, as experts are advising caution against heatstroke.

Temperatures have soared above 30 degrees for many days and even exceeded 35 degrees across Japan since mid-July.

The forecast for temperatures in the Kanto-Koshin region in August are to be about the average or higher as well.

“The mercury could rise above the average as it is the hottest time of year,” said Motoaki Takekawa, who heads the Center for Information on Climate Extremes, also known as the Tokyo Climate Center. “Caution is necessary to prevent heatstroke.”

Fukushima recorded temperatures in the 37-degree range on July 19 and 20. The mercury rose to 35.5 degrees on July 21, when competitions in the Games kicked off.

The opening softball game started that morning at the Fukushima Azuma Baseball Stadium in Fukushima. Members of the Japanese women’s softball team frequently took out bottled drinks from a cooler to rehydrate themselves as they played against Australia in the scorching heat.

Japan downed Australia 8-1 in five innings, as the game ended early under the mercy rule.

Temperatures have also exceeded 33 degrees since July 18 in central Tokyo, where many competition venues are located.

Sapporo will host marathon and race-walking events in early August. The capital of Japan’s northernmost main island recorded a daytime high of 35 degrees on July 19, nearly 10 degrees higher than the average for mid-July. Temperatures are expected to continue exceeding 30 degrees there.

The daytime high will likely reach 33 degrees, higher than the average, in central Tokyo on July 23, the day of the Opening Ceremony, according to a two-week forecast released by the Japan Meteorological Agency on July 21.

The area can expect temperatures of 30 degrees or lower between July 26 and 28, but the mercury is likely to hit 32 degrees there for many days after the period.

(This article was written by Ryo Yamagishi, Yusuke Saito and Daisuke Maeda.)