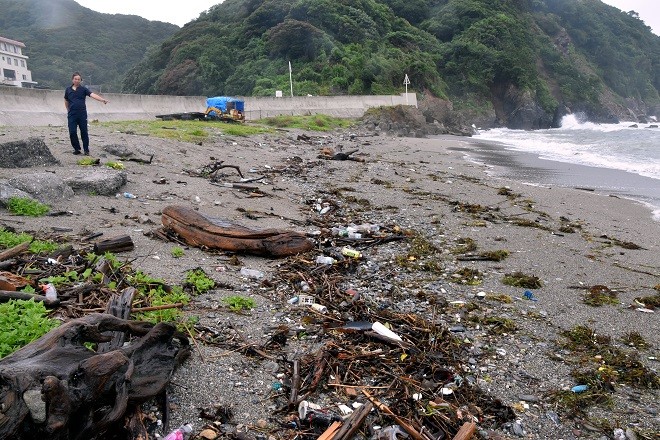 TOBA, Mie Prefecture—For more than 20 years, Yoshiji Nakamura has often single-handedly cleared his island beach of garbage and debris, only to see more waste drift in and ruin his cleanup effort.

Finally, after all the endless toil, dwindling crowds and the spread of the COVID-19 pandemic, he closed down the Omanohama beach for good just before this year’s bathing season.

“It was like Children’s Limbo in Buddhism where one has to endlessly engage in unrewarded tasks,” Nakamura said of his beach-cleaning work. “There appeared to be no end to it.”

The Omanohama bathing beach on the Toshijima islet in Toba city is located 500 meters from Wagu port. People can reach the port in 15 minutes by ferry along a regular course from the Toba Marine Terminal on the mainland.

The 80-meter-wide beach was usually open from mid-July through early September, and it was reportedly flooded with bathers in the 1980s.

Nakamura, who manages a ryokan, initially looked after the beach with other inn operators. But after another bathing beach opened nearby, Nakamura took care of Omanohama alone for more than two decades.

He and staff from his ryokan cleared the large amount of waste from the beach when swimming season neared. The removal process took around a week.

However, new waste arrived there every time a typhoon or torrential rainfall hit.

Driftwood, plastic bottles and fragments, and other floating objects have posed a serious contamination problem for coastal areas around Ise Bay for more than 10 years.

Toshijima has been hit especially hard.

In 2007, the Environment Ministry placed locator devices in 18 plastic bottles and released them in three major local rivers and other upstream areas.

Six of the bottles eventually landed in Toshijima.

Of the 12,000 tons of waste that drifts into Ise Bay annually, one-fourth washes ashore in Toshijima, according to an estimate by Mie Prefecture.

With the heavy rain in spring this year, the Toba municipal government quickly used up 8 million yen ($72,600) in subsidies to remove waste at local fishing ports. An additional 3 million yen for cleanup costs was included in the supplementary budget.

To make his beach available every year and preserve “the memorable place for children,” Nakamura continuously bought used heavy machinery and made other efforts to remove the trash.

Despite his hopes and efforts, visitor numbers declined.

Nationwide, beach-going has drastically declined, in part because more leisure activities are available.

According to the Japan Productivity Center’s report on recreational activities, the number of beach visitors was down from 37.9 million in 1985 to 6.3 million in 2019.

For Nakamura, it grew nearly impossible to clear his beach while operating his ryokan during summer. When stormy weather dumped another heap of waste on his just-cleaned beach, he lamented having to “start again from the beginning.”

After the novel coronavirus pandemic reached Japan, Nakamura decided not to open his beach last summer. And costs to replace the heavy cleaning machinery have added to his burden.

He decided to shut down the bathing spot this summer.

“I feel great sorrow over the beach’s closure, but the trash will never disappear no matter what I do,” Nakamura said. “I actually feel rather relieved now.”

Advanced coast erosion and other factors have resulted in fewer bathing beaches across the nation. The number of such sites decreased to 1,082 last year from 1,379 in 1993, according to the Japan Travel and Tourism Association.